Through a combination of primary documentation, newspaper archives and military records, I research and compile detailed narratives of people’s lives and military service from World War I and World War II. I’m even a card-carrying National Archives researcher!

Here’s a list of stories that I’ve put together for friends and family. If you have anyone in mind that you would like help researching, feel free to get in touch.

A son of Dutch immigrant farmers and a young college student in Michigan, Anthony Engelsman served with the 310th Engineers Regiment during World War I. Repairing roads and bridges in France during the Battle of Saint-Mihiel and the Meuse-Argonne Offensive, he later served in the Army of Occupation in Germany after the Armistice and eventually became a professor of government and political science after the war. 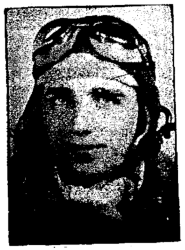 A young entrepreneuer who started the Berkley Fly Company at the age of 15, Berkley Bedell put his company on hold to join the US Army Air Corps as a flight instructor training new aviators during World War II. Likely training as a B-29 Superfortress crewman, he was weeks from deploying to the Pacific when the atomic bomb was dropped. After the war, he would go on to become a successful businessman and a U.S. Representative for the state of Iowa. 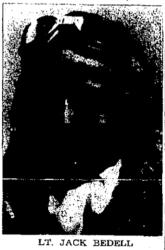 Like his older brother Berkley, Jack initially served in the US Army Air Corps as a flight instructor during World War II. But he eventually deployed to the Pacific theather as a crewman on C-47 and C-54 cargo planes, flying across the Himalayan mountain range between India and China on an extremely dangerous route known as The Hump.

Edward Lincoln Thomas Jr served as a soldier in HQ Company of the 83rd Field Artillery Battalion. Attached to the 3rd Armored Division towards the end of 1944, this battalion provided artillery support with their M7 Priest howitzer motor carriages during the Battle of the Bulge. Within the company, Edward was known for his use of chocolate bars as a “means of exchange” and for his voracious appetite. 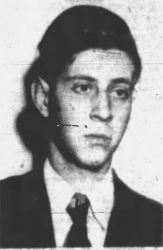 Kurt and Irma Goldstein immigrated to New York in 1941, having fled their home country of Poland and the mass deportation of Jewish people by the Nazis. Dr. Erich Zwilsky and his wife, Irma’s sister Ruth, stayed behind with their teenage son Klaus, living and working at a Jewish Community Hospital in Berlin until its liberation in April 1945. After celebrating Klaus’s bar mitzvah, the first in Berlin after the war, the Zwilsky’s were eager to leave the detoriating conditions as described by Dr. Zwilsky in a New York Times article published soon after the war. Recognizing her brother-in-law’s name in the paper, Irma Goldstein then worked with the US Army to find the Zwilsky’s in Berlin and bring them to America. 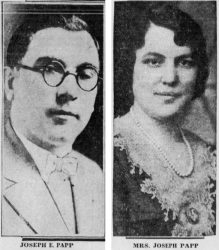 A Hungarian immigrant who settled in Akron, Ohio, Joseph Papp was a grocery store owner and a corn sugar dealer during Prohibition in the 1920’s. Charged with manufacturing liquor by a grand jury, he was eventually murdered in cold blood by two men believed to be involved with the mob in Cleveland, leaving behind a wife and three teenage children.

Eight years after the death of her father when she was only 15 years old, Mary Ethel Papp graduated from nursing school in 1941. Later that year, she enlisted in the US Army Nurse Corps, only three months before the Japanese attack at Pearl Harbor that catapulted the United States into World War II. Arriving in Australia in early 1942, Mary served in New South Wales as an Army nurse before deploying to New Guinea and the Netherland’s East Islands providing medical support for US troops fighting the Japanese, eventually receiving a Bronze Star for her service.

The youngest Papp sibling, Joseph M. Papp followed his older sister Mary into the war effort when he was drafted into the US Army in July 1943. Eventually serving in the 33rd Armored Regiment, most likely as a rifleman providing infantry support to the 33rd’s M4 Sherman tanks, Joseph fought in Europe and was injured during a fierce battle near the Siegfried Line. Returning to England to recover, Joseph Papp would eventually receive a Purple Heart with one Oak Leaf Cluster, a Bronze Star and a Silver Star for his service. 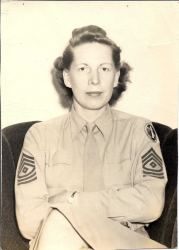 Ann Robel enlisted in the Women’s Army Auxiliary Corps a few months after its creation by President Roosevelt in 1942. After it became the US Army’s Women’s Army Corps, Ann would go on to achieve the rank of First Sergeant, the second-highest rank for an enlisted, non-commissioned officer and a rank achieved by less than 0.6% of enlisted women during World War II. She served in the United States Army Military District of Washington, a major command tasked with the ground defense of the nation’s capitol and providing support to the newly built Pentagon.

During World War II, Stanley Edward Skidmore was eager to fight in Europe and left the 10th Mountain Division in order to join the 318th Infantry Regiment, serving as a sergeant and a squad leader in its 2nd Battalion, Company E. The 318th would go on to fight in many battles throughout France, Luxembourg and Germany during the war, eventually crossing the Rhine in March 1945. They helped the 6th Armored Division liberate the Buchenwald and Ebrensee concentration camps, and later secured the Altausee salt mine from the Nazis with its horde of stolen art. 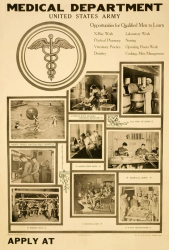 The son of a wealthy businessman in Seattle, Victor Freed was studying medicine at the University of Oregon when he was drafted into the US Army during World War I. He would sail for France two days after the armistice was signed as part of the US Medical Department providing care for wounded soldiers overseas. Working at a mobile hospital unit in Curel, France, he would succumb to the ravages of typhoid fever during an outbreak there in late 1918. 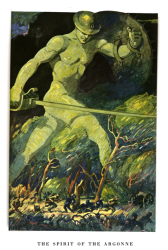 A young farmer from Minnesota who had recently moved to Seattle with his family, Victor Edgar Hanson joined the US Army at Camp Lewis in June 1918 and likely had very little military training before being sent to the war in France. As a new replacement in Company H of the 308th Infantry Regiment, part of the “Victorious” 77th Division out of New York, Victor would soon be killed from a head wound during fighting in the Argonnes forest as part of the battle for the Lost Battalion. 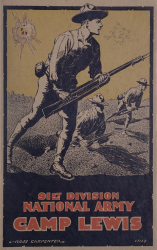 A dairy truck driver in Seattle who joined the US Army soon after the United States entered World War I. He trained at Camp Lewis and eventually became a Corporal with Company L of the 361st Infantry Regiment, part of the 91st “Wild West” Division. Only a few days after the start of the Meuse-Argonne Offensive, he would be killed by artillery on a charge led by his battalion commander to take Miller Hill outside of Gesnes, France. 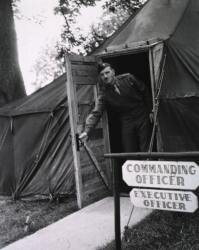 Howard William Karl Zellhoefer was a career military surgeon in the US military. He was an active member of the US Army Officers Reserve Corps during studies at Harvard Medical School and a fellowship at the Mayo Clinic. Arriving in Hawaii a few weeks after Pearl Harbor in 1941, he was in charge of a large general hospital before taking command of the 280th Station Hospital, an experimental tent hospital that deployed to England in December 1943 and crossed the channel a few months after D-Day. He went on to command the 40th General Hospital in Paris prior to the end of WWII. By 1948, he had returned to activity military duty, joining the recently-formed US Air Force as an instructor at the School of Aviation Medicine. He would then become the command surgeon of the 20th Air Force in Japan just prior to the Korean War and would finally retire as a Colonel in the US Air Force by 1952.

Wildred Howell “Hal” Jordan joined the US Navy in November 1943, eventually becoming an engineer on a Landing Craft Mechanized (LCM). He would go on to ferry troops from London to Omaha Beach on D-Day, pull soldiers out of the water after the sinking of the USS Leopoldville near Cherbourg, France, and later ran channel patrols aboard the USS PC-618. He would even get a chance to fly over Germany in a C-47 cargo plane, kicking cans of fuel out of the back to help refuel the tanks of Patton’s 3rd Army.

A young machinist working at a printing press manufacturer in Delphos, Ohio, Arnold Odenweller was drafted into the US Army Air Service during World War I. He would join a new breed of Aviation Armorers, training at the Wilbur Wright Field in Ohio on how to mount machine guns, bombs and gun sights to airplanes, those flying machines that had only been in the air for 15 years since the Wright Brothers first flight. He would deploy overseas in France and join the 1st Aero Squadron, the US military’s oldest operating aviation unit, a unit which would provided aerial reconnaissance throughout the war effort.