This is a reminder that some things shouldn’t be turned into Twitter bots.

The inspiration for this bot came about after I had my first armageddon dream from reading too much news on North Koreas nuclear missile tests. Like many others, that led me to find Alex Wellerstein ( @wellerstein)’s amazing NUKEMAP, a web map nuclear weapons effects simulator.

For reasons I can’t remember, I also became interested in the history of Broken Arrows, the term for “an accidental event that involves nuclear weapons, warheads or components that does not create a risk of nuclear war”. At the time, it seemed like a reasonable idea to create a Twitter bot that, like NUKEMAP, showed the geographic scale of nuclear blast effects, based on the premise that one of the nuclear arsenal had been subject to a Broken Arrow event at a random location in the United States.

A yield was selected, then the radii of various blast effects were calculated* and overlaid on a satellite image map at a randomly selected location within the continental United States. All of this information and some static masks were then composited as multiple layers using an image processing library to create a dynamically generated image.

The generated image was then posted to Twitter with some accompanying text meant to imitate the military brevity of an operational report. 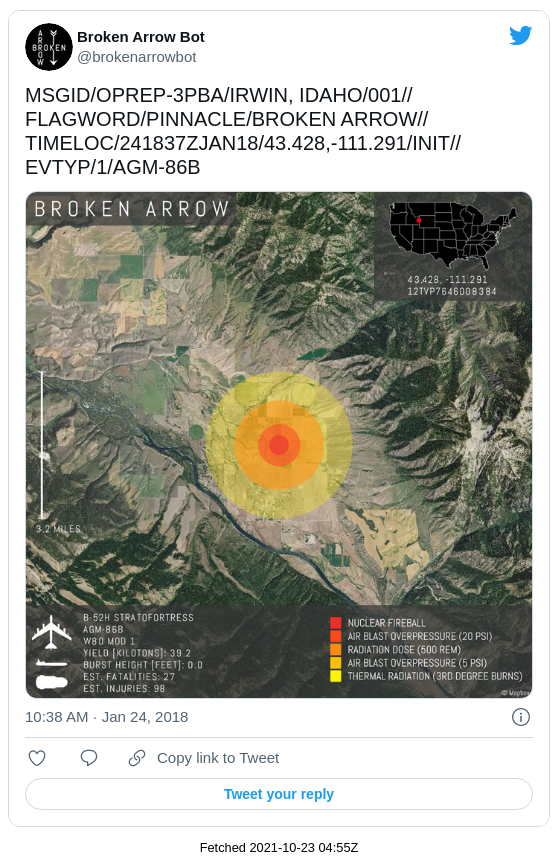 The bot itself was written in Node and deployed with a small library of image assets to AWS Lambda. I let it run for a few weeks before killing it, but I’ve left a few of its posts up for reference.