On the death of an oil rig.

This is going to be a story about death. Not a tragic death but rather the slow-moving disassembly of an industrial machine. The machine could be viewed as a monster but the aim is not to celebrate its death. Rather, we look to reflect on our role in creating such a machine, to understand how it dies, and to hopefully find a part of ourselves in it along the way, for better and worse.

So, how exactly does an oil rig die?

On the Nature of Oil Rigs

To answer this question, we need to first understand some important fundamentals about offshore oil rigs, as helpfully explained in this video.

It’s an excellent summary on the nature of offshore oil rigs that focuses on the unfolding situation in the UK and the nearby North Sea, an industrial area being hit particularly hard at the moment for reasons that the video helpfully describe.

These changes in economic winds are why some oilfields in this area, like the famed Brent oilfield, have been on their deathbeds for the past 5 years or so. But to better understand their deaths in context, we should first look back at their histories.

In particular, let’s take a closer look at the the Brent oilfield. Since starting production in 1976, the oilfield has produced about 4 billion barrels of oil, or about 10% of all oil produced in the North Sea to date.

The oilfield also lends its name to the term “Brent crude”, a major oil price benchmark that notably makes the news for its steep drops when nation states can’t agree on fixing prices or sometimes go to war. Throughout the life of the Brent oilfield, co-owners Royal Dutch Shell and ExxonMobil have exchanged its extracted resource for this price on the global market, totalling $46 billion in revenue. Usually this exchange is done at points in time when the namesake price of its oil was more than $0 dollars per barrel.

As mentioned, the Brent oilfield (and others of its ilk) has been on its deathbed. After 40 years of production, its aging infrastructure and depleting oil reserves means that the financial calculus of operating the platforms has changed, a culmination of factors succinctly explained in the video above.

Reading these changing winds, Shell announced in 2015 that they intended to start decommissioning the oil field’s platforms. “Decommissioning” refers to the removal of something from service, a typically technical and clean way of talking about dismantling and destroying industrial equipment. This announcement by Shell led Anthony Hobley, chief executive of Carbon-Tracker, to remark at the time:

One wonders if future generations will see this as one of the events marking the beginning of the end of the fossil fuel era.

Two years after this announcement, Shell began efforts to decommission the Brent oilfield. It started with the removal of Brent Delta in 2017, followed by the Brent Bravo in 2019, and the Brent Alpha in 2020. It’s expected that the decommissioning of the entire oilfield will be completed by 2022.

Prior to its ongoing disassembly, the Brent oilfield in its heyday consisted of four oil platform structures (or “oil rigs”), each named after that most inspirational of literary sources, the NATO phonetic alphabet. 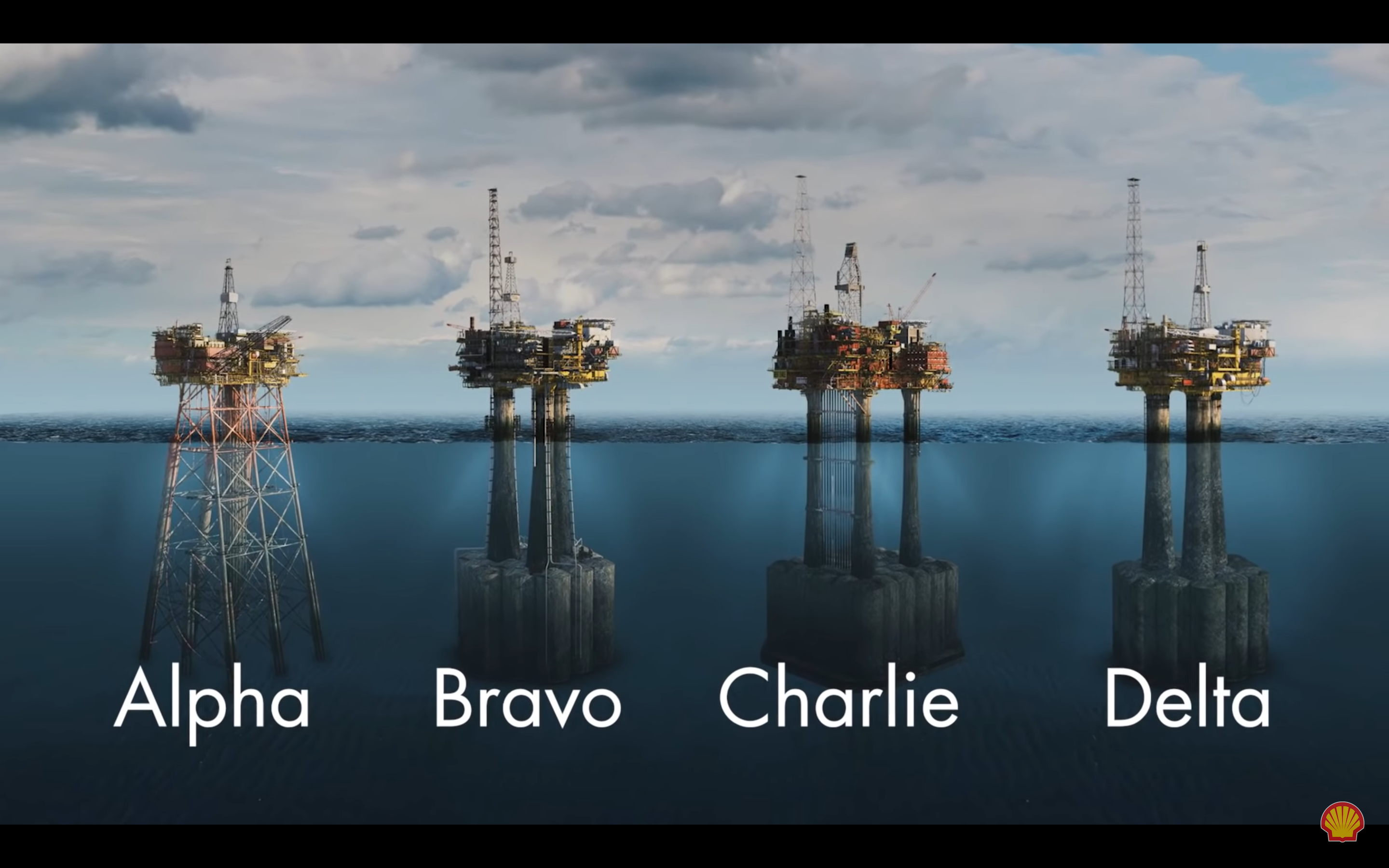 A platform structure is made up of an upper half (the topside) and a lower supporting structure, known as the jacket. Generally speaking, the topside is any part of the structure that can be seen above the water, not including the supporting legs. It’s the mental image that comes to mind when we think of an “oil rig”, like these Brent topsides shown here in their natural habitat. 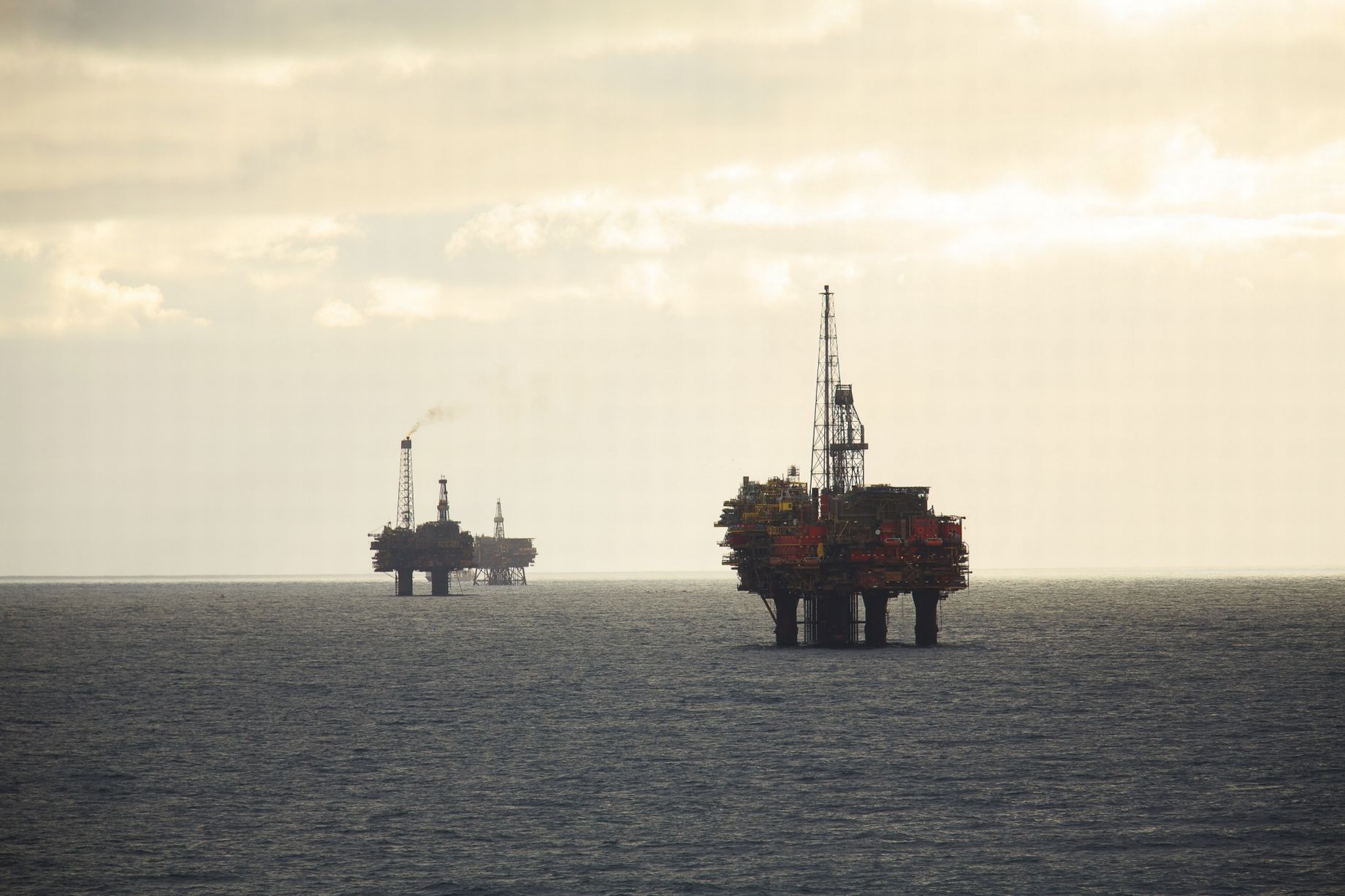 A topside is mostly made up of industrial equipment related to the drilling and extraction of oil but also includes the living habitat for its human crew, those operationally necessary if economically unwelcome parasites in the offshore oil drilling ecosystem. The topside also includes the drilling rig which is responsible for creating the many well lines that lay hidden under the seafloor, an invisible web of pipes sucking up oil from the depths. 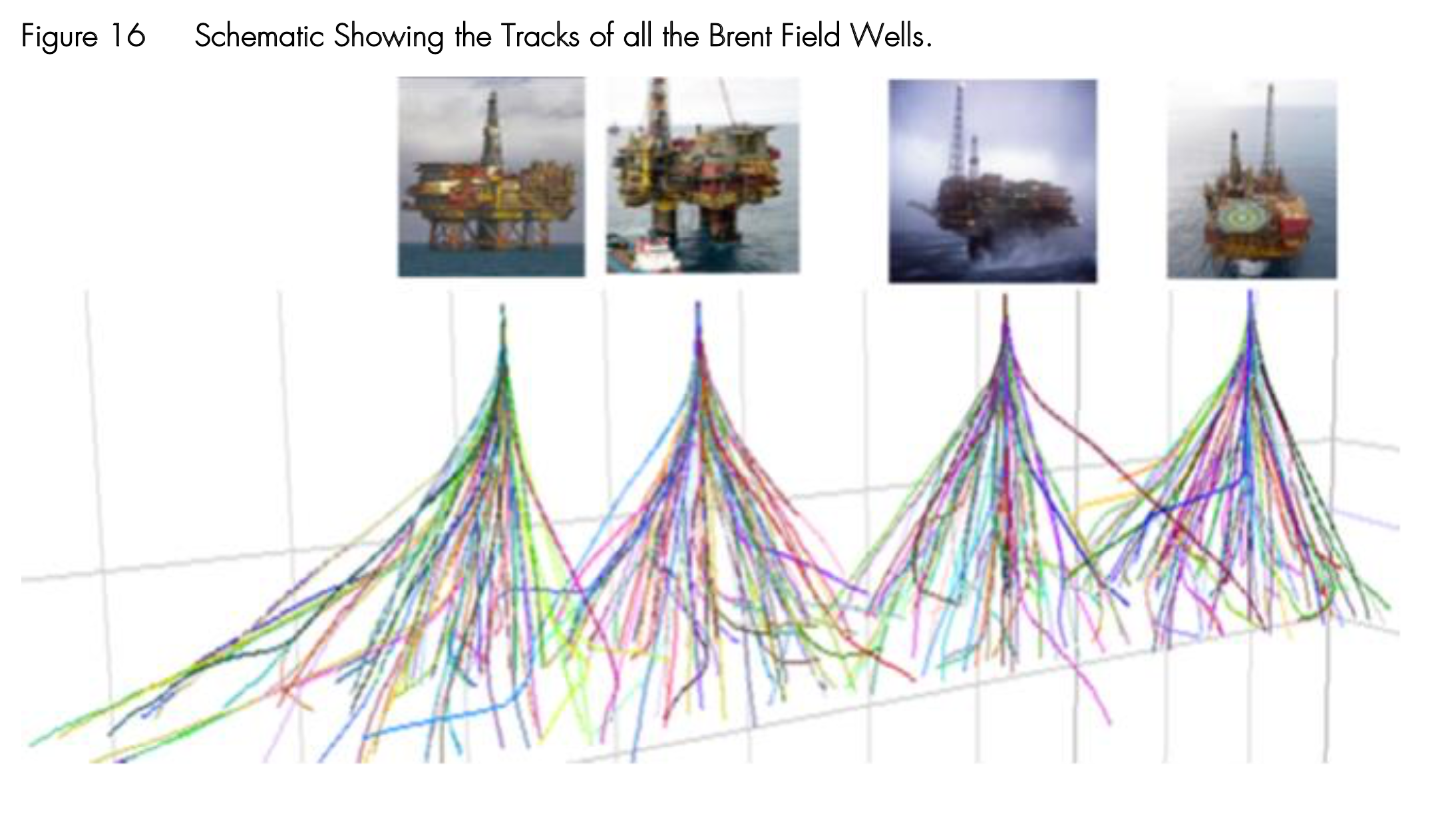 Each of these oil platforms in the Brent oilfield, and their related webs of pipes, are connected by an underwater network of pipelines, collectively known as the Brent System, which transports the lucrative liquid from various oilfields back to the Sullom Voe Terminal on the Shetland Islands in the UK. 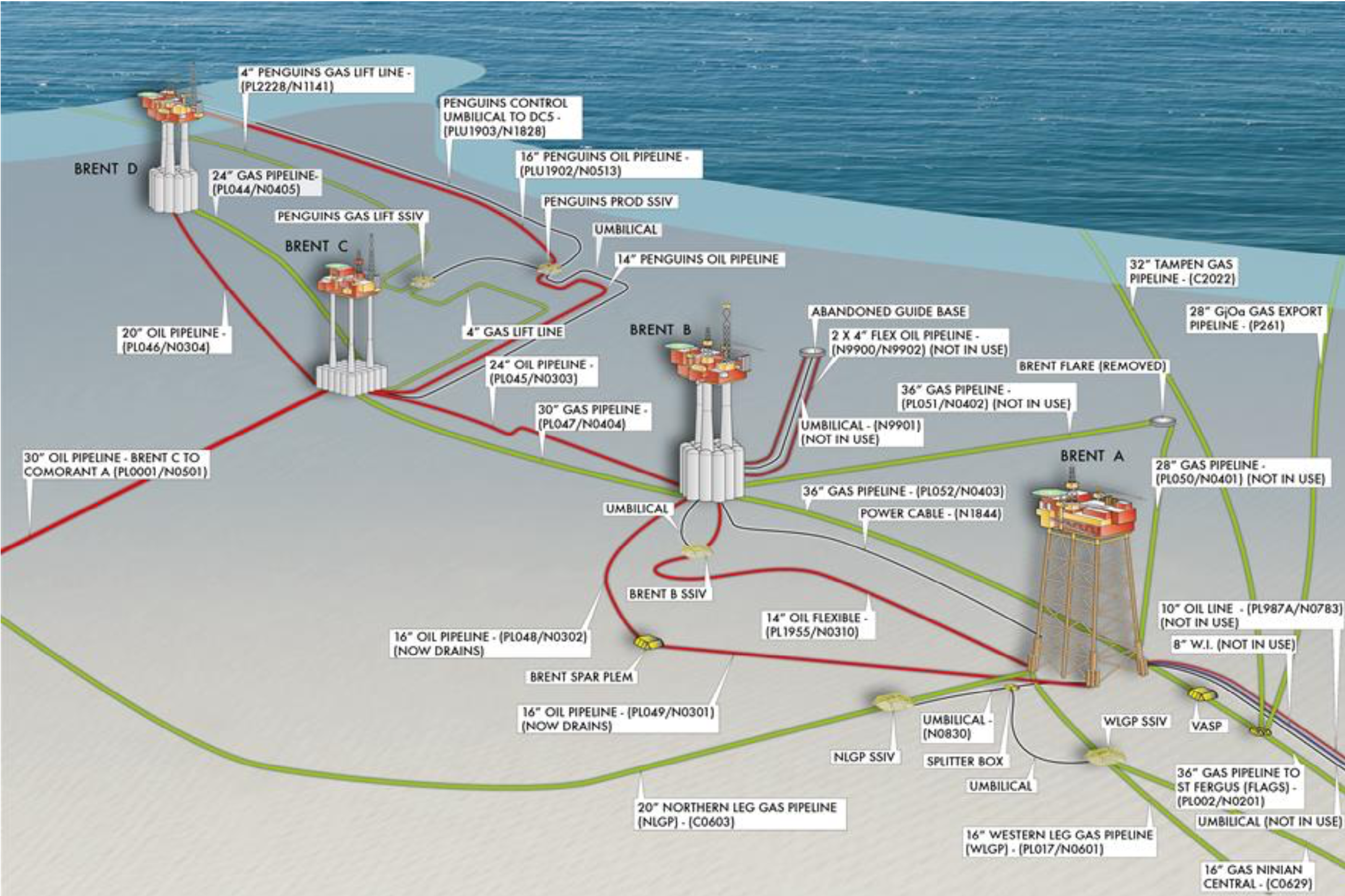 Taken all together, the Brent oilfield and others like it are massive collections of industrial materials and machines, impressively complex ecosystems with the singular purpose of extracting and transporting oil.

But as the economic winds bring change, this particular ecosystem is dying. And like many ecosystems in nature, behind each death of an offshore oil rig lies a complex ballet of decay and decomposition.

It might be fair to say that offshore oil rigs have no natural predators, other than economics. But lurking in the shadows of the near-shore seas are singularly-efficient scavengers. Meet the Pioneering Spirit.

The Pioneering Spirit is a crane ship with the impressive yet overly specific title of “ largest ship in the world by internal volume” (a unit of measurement in maritime vernacular also known as “ gross tonnage"). Owned by the Allseas Group, a “world renowned contractor in offshore pipeline installation, heavy lift and sub-sea construction”, the Pioneering Spirit at first glance gives off few hints of an industrial scavenger suited to the task of decommissioning an oil rig. But the inconspicuous ship specializes in a manner of oil rig reclamation known as “single-lift topsides removal”.

Off With Their Heads

“Single-lift topsides removal” is a synchronized dance of hydraulic actuators, water thrusters and GPS receivers, a dance so slow that it surely lulls the unsuspecting oil rig into an even deeper sleep. The dance culminates in the clean removal of the resigned and heavy topsides from the exhausted shoulders of the ocean.

With its topsides removed, the oil rig is now no longer an oil rig. It has been separated from its foundation, from the web of pipes that infused it with dark life. But at what point did the oil rig cease to be an oil rig? When exactly was its time of death?

Did it die when its fate was sealed by a tally of its doomed economics? Did it die when its last oil pump went quiet and cold? Or did it die when the last lights were turned off by the industrious parasites that had inhabited its labyrinthine body, as they abandoned the husk that had once fueled their livelihoods? 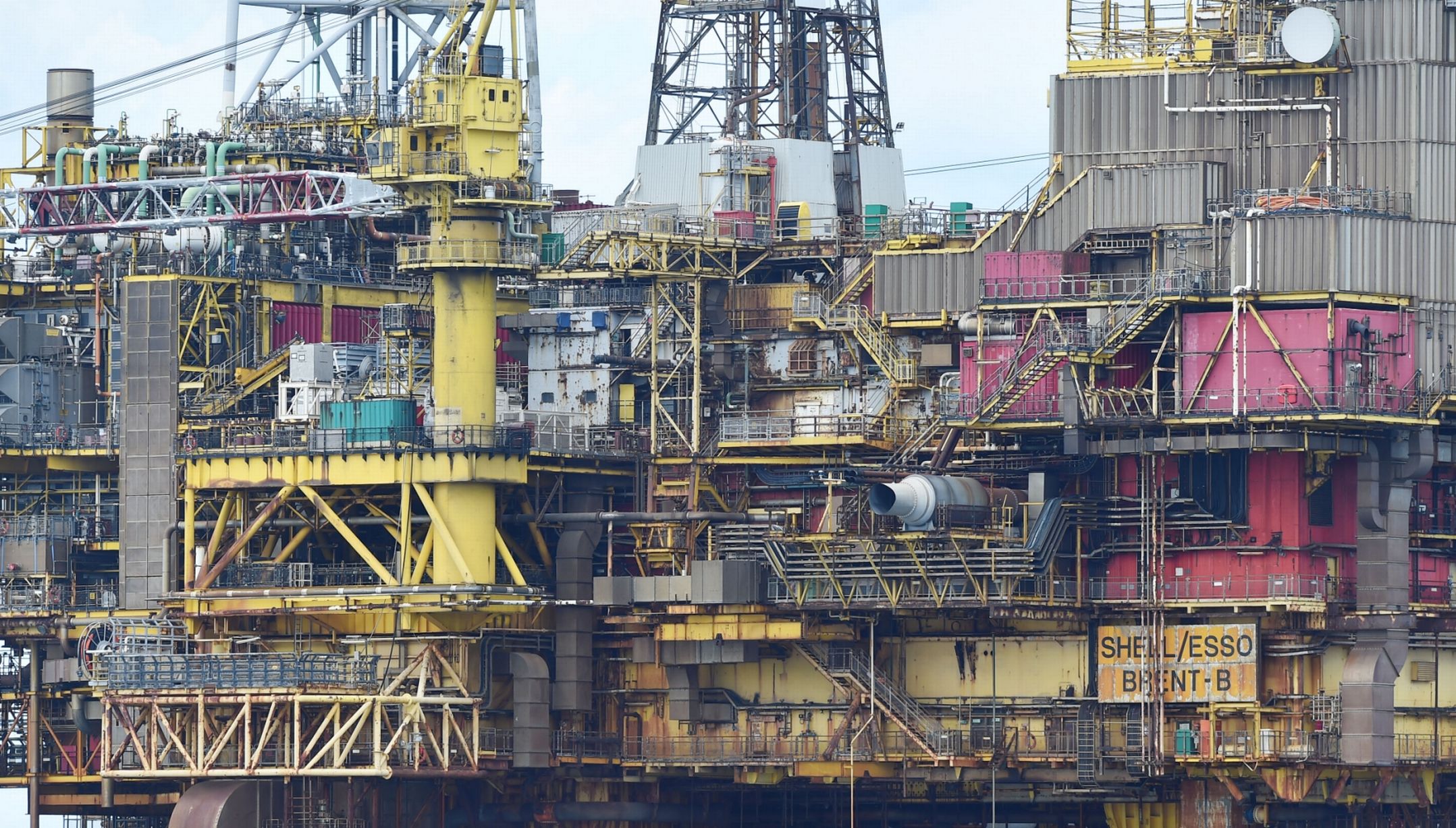 At some point, the oil rig has transformed into a decrepit and rusted monument, somehow even more out of place on the ocean’s surface than when it had been alive. But the oil rig will find no grave at the bottom of the ocean, affording the watery depths at least some respect that wasn’t given to them while the oil rig was still alive. Although some scars will remain.

Instead, its guide will be the Pioneering Spirit, executioner turned grisly ferryman, as the ship hauls the lifeless oil rig on a 500-mile journey to the shores of the English borough of Teesside.

As it approaches the shore, the in the first placewind and waves that must have appeared so ominous and threatening to the oil rig out on the open ocean have become softer and more playful. 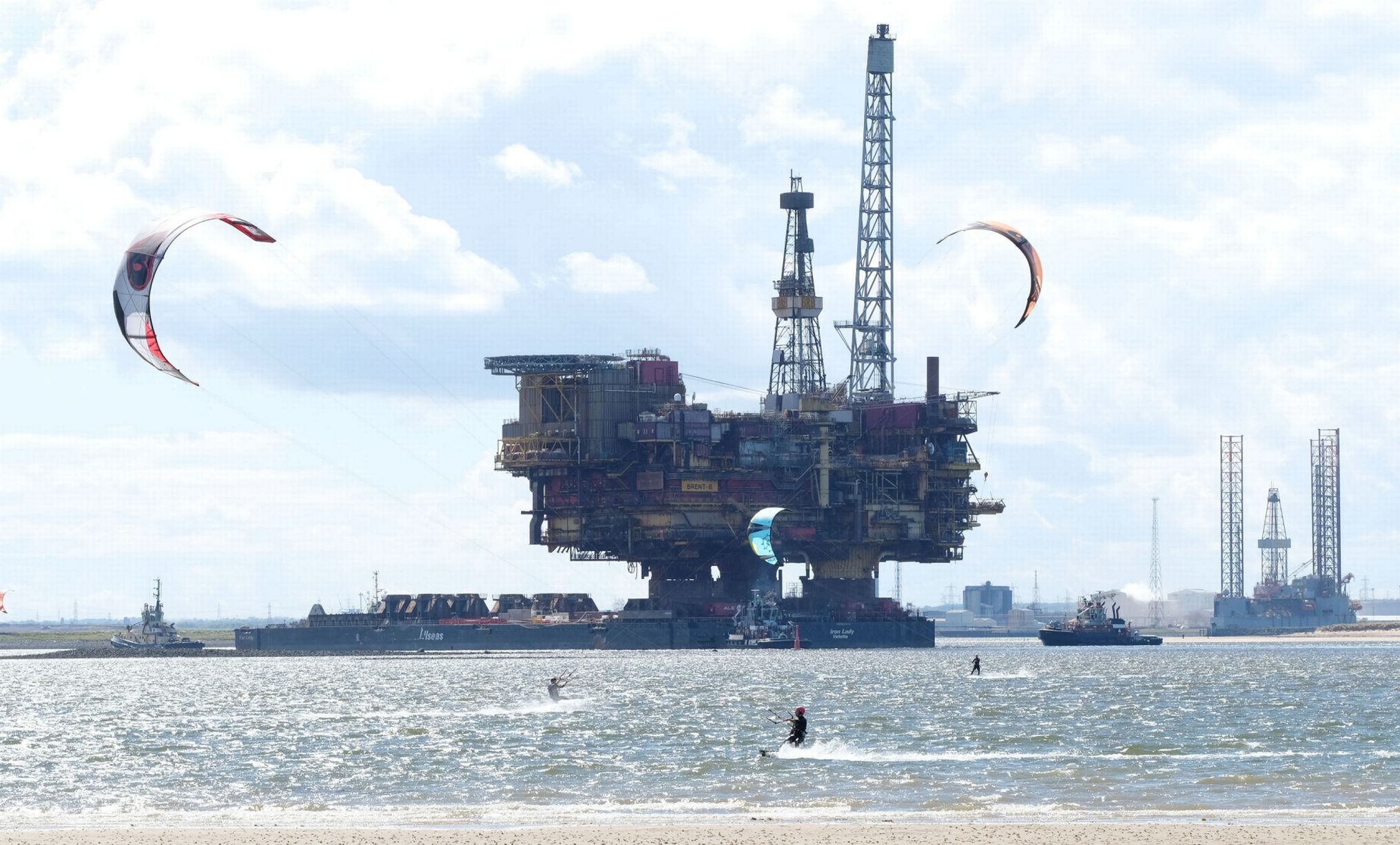 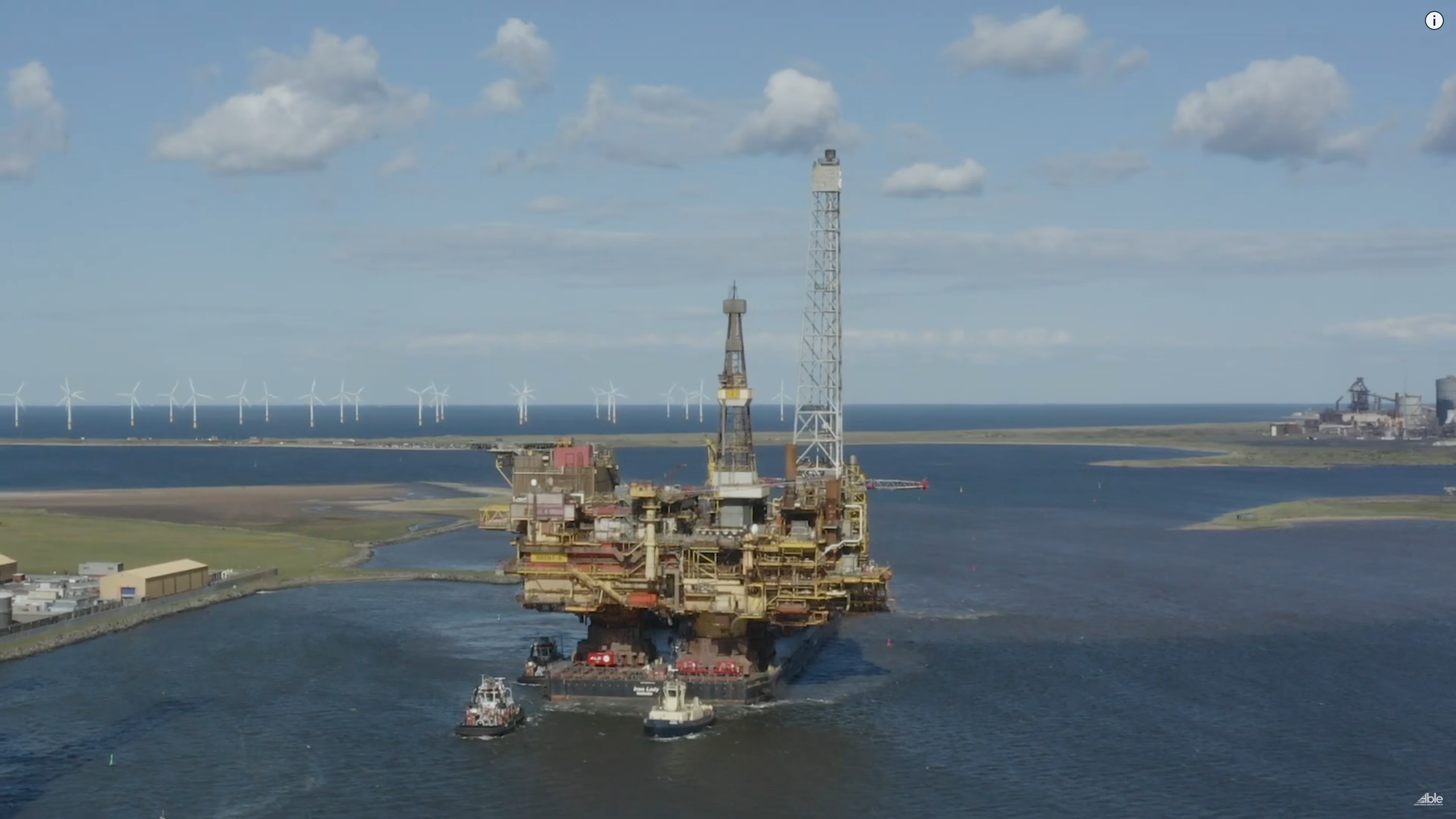 Its dystopian sci-fi aesthetic of harsh sea-worn and beaten metal now stands in partial contrast to the bucolic yet industrious environment around it. As a former ocean-squatting behemoth, it now looks awkwardly out of place welded to solid land. 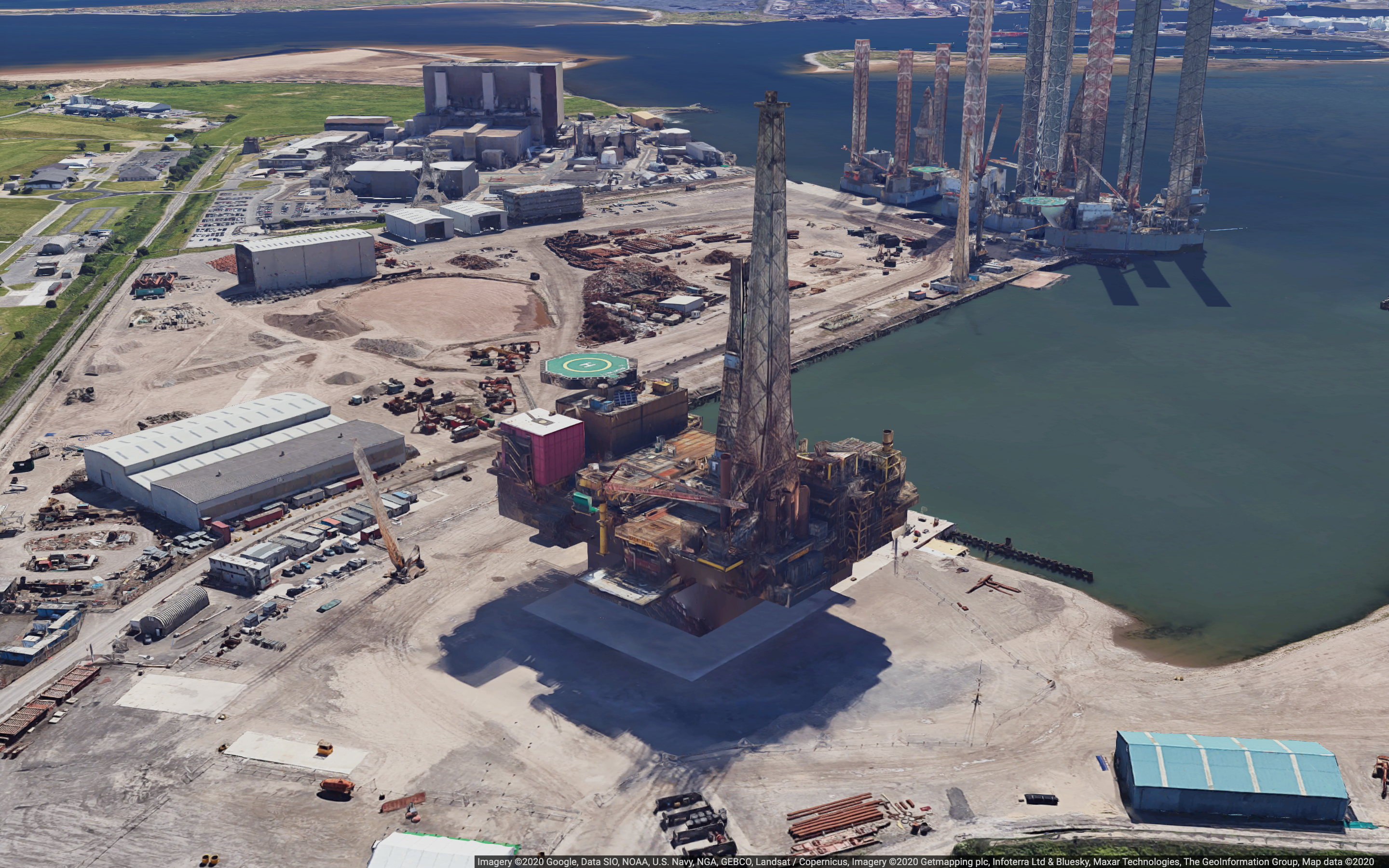 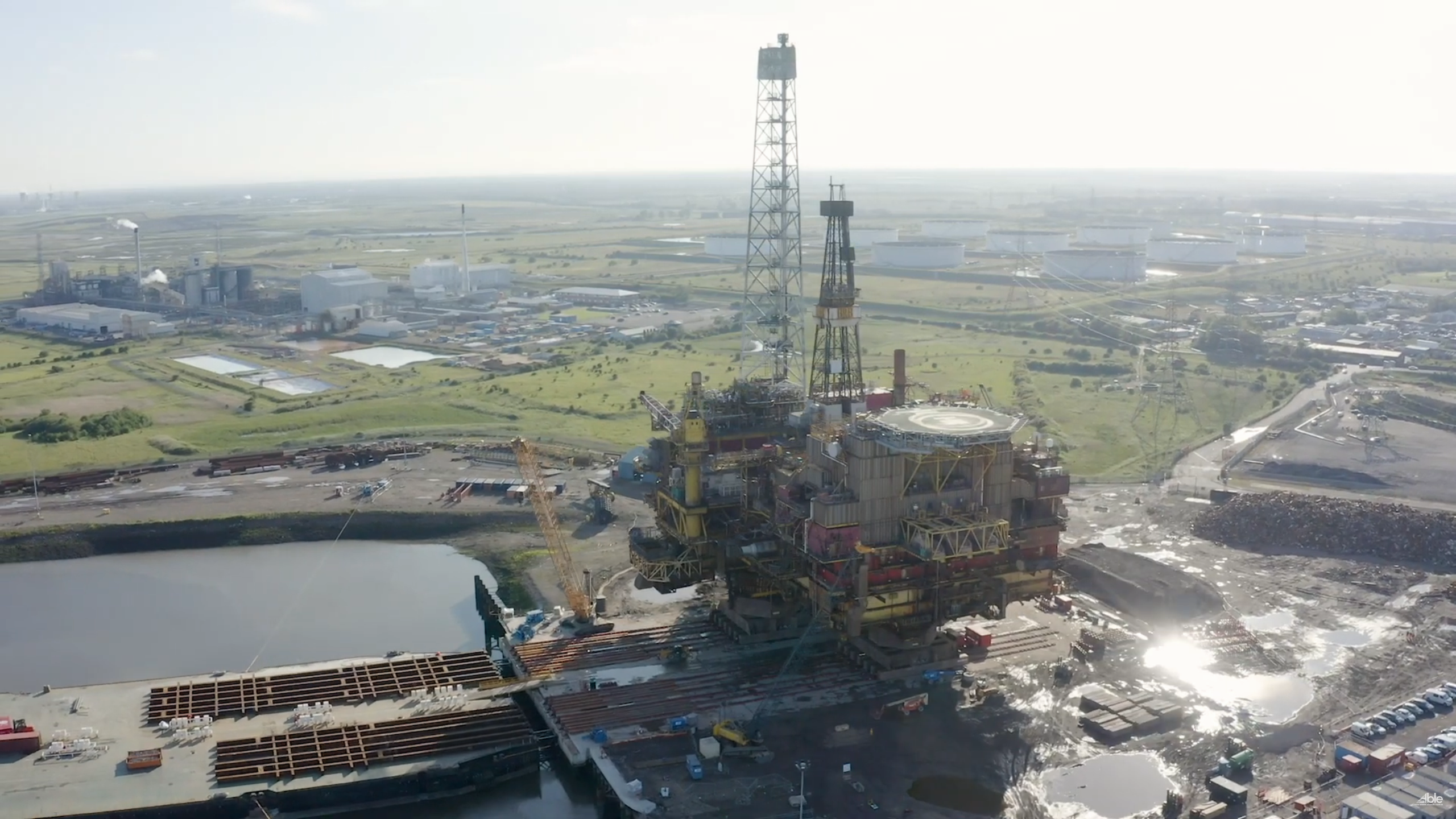 It has come to this place because the port of Teesside is home to Able UK, a “market leader in the field of demolition and marine decommissioning”, whose job site of Seaton Port is particularly well-suited to certain tasks of elevated entropy.

Epic scores only serve to belie the sad scene now unfolding, that a process of accelerated decay is underway. What was once built by human hands to withstand all natural forces is now being undone by those same hands.

Like many other natural cycles of death and decay, the essence of a creature is made up of many raw materials that it takes from its environment, later to be returned on its death. Similarly, the steel, rubber, asbestos and naturally occurring radioactive material (NORM) that make up the Brent oil rigs will be returned to…somewhere. 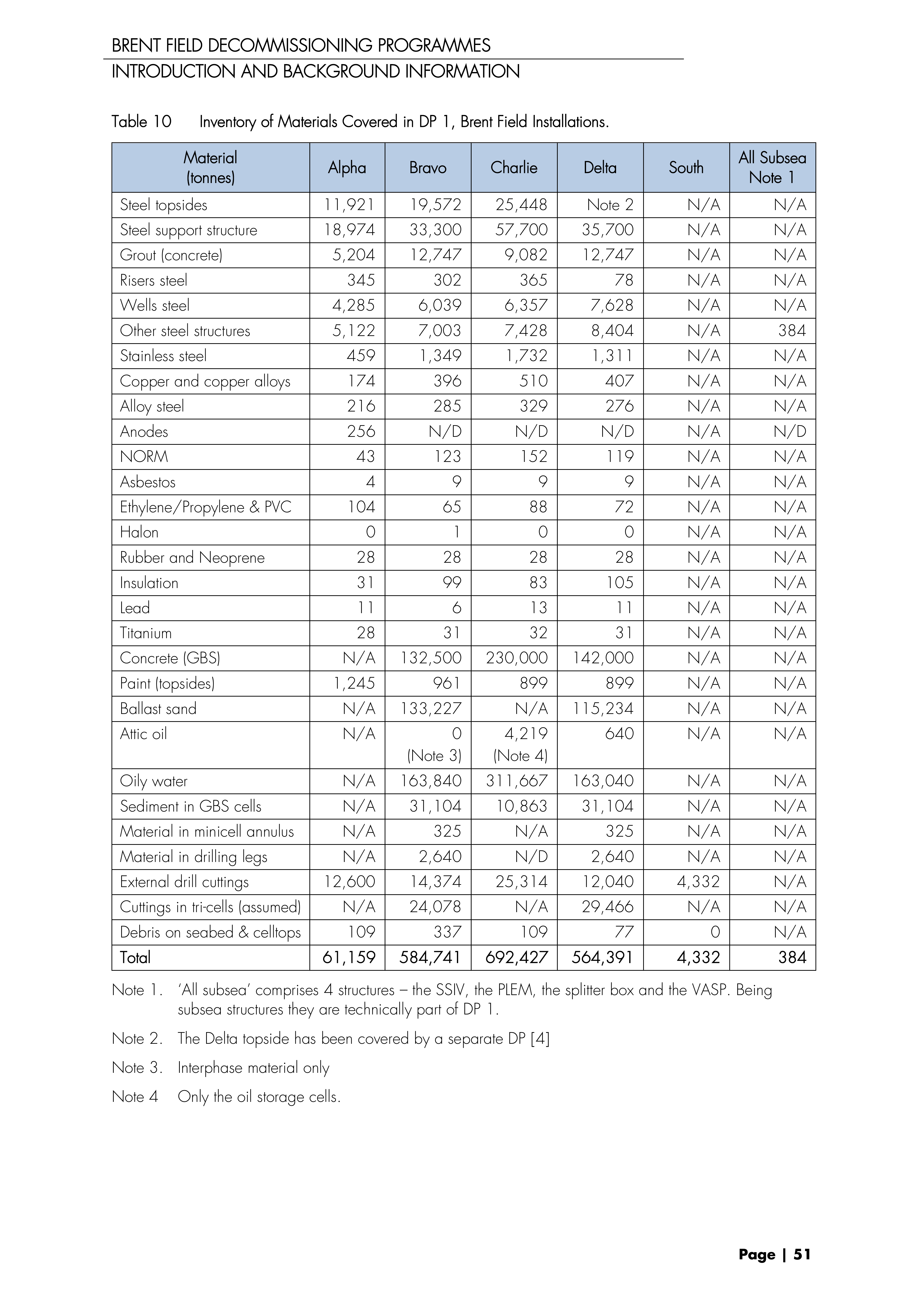 These oil rigs will be broken down into their constituent parts here at the Seaton Port, those parts presumably then shipped, by truck or ship or rail, to some faraway landfill or recycling center. Nothing will remain, except that which has seeped into the earth in an eager and misguided attempt to return to nature.

And with that, we can be certain that an oil rig will be dead.

What will we remember of the oils rigs after they die, when the last of their kind have been ripped into discardable pieces of scrap steel and scattered to the wind? Will we remember the rusting pipes and worn concrete legs that are left behind, hidden and forgotten, under the ocean waves? Will we remember the effort it took to build the oil rigs? Will we even remember the ways in which the oil that they pumped was used to fuel the thirst of the world?

All natural processes and all human actions are, in the most fundamental physical sense, transformations of energy.

These are questions worth asking. The way in which we, as humans, use energy is a fundamental part of our existence, driving our growth and our evolution. A single oil rig is easily forgotten in the grand scheme of things, but we’ve used it here to illustrate a point: that to truly know something is to understand both how it lives and dies.

What we do know is that all matter is energy at rest, that energy manifests itself in a multitude of ways, and that these distinct energy forms are linked by numerous conversions, many of them universal, ubiquitous, and incessant, others highly localized, infrequent, and ephemeral.

To ignore how an oil rig got to be where it was, what it did and where it went is to forget a link in the chain of our energy history, a chain that we use to pull us forward but that also anchors us.

...every transition to a new form of energy supply has to be powered by the intensive deployment of existing energies and prime movers: the transition from wood to coal had to be energized by human muscles, coal combustion powered the development of oil, and...today’s solar photovoltaic cells and wind turbines are embodiments of fossil energies required to smelt the requisite metals, synthesize the needed plastics, and process other materials requiring high energy inputs.

The oil being pumped by those oil rigs still living will become the energy that is used to create new energy generation sources, whether it’s through the production of cement and steel for coal plants, the enrichment of raw ore into nuclear fuel, the smelting of silicon into solar photovoltaic panels, or the molten extrusion of fiberglass into wind turbine blades. The cycle of energy generation and consumption will continue marching on and how we manage that cycle, in both the life and death of our energy systems, will be what defines our civilization.

We can neither ignore nor forget how or where we bury the dead after they die. 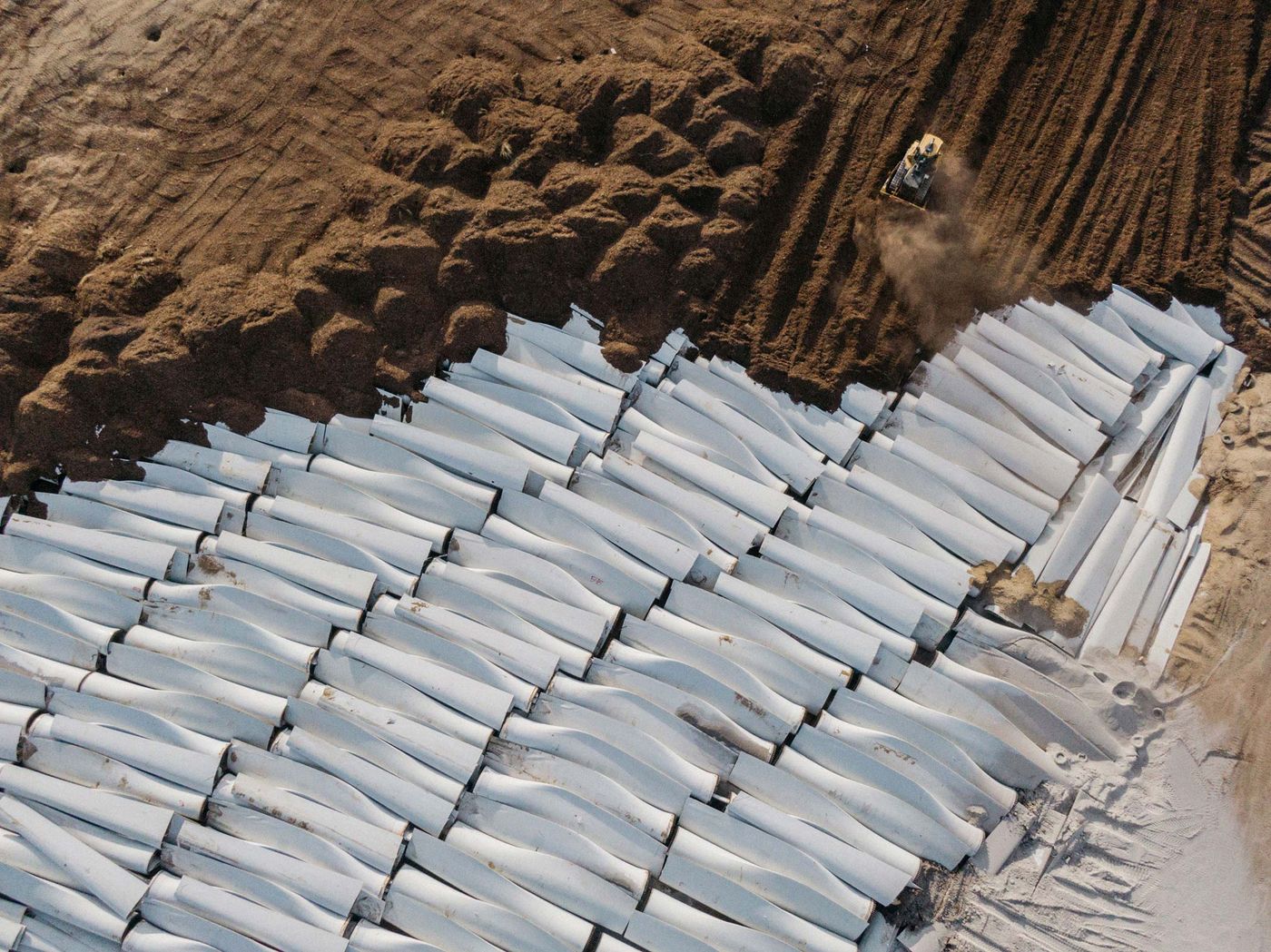