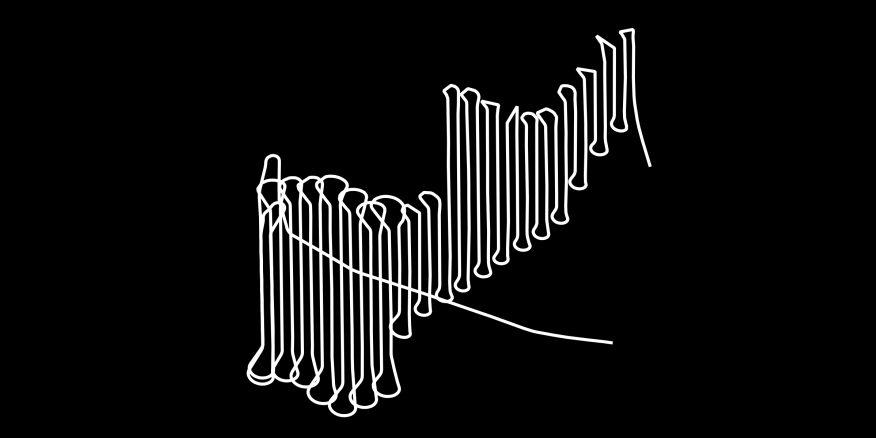 This flight happened this afternoon. Private plane (Cessna 310R) over Scranton PA. What on earth were they doing? pic.twitter.com/WZIVKIwi7M

Questions like these pop up on Twitter here and there. The accessibility of live flight tracking websites like FlightRadar24 and FlightAware is great for skywatchers and spotting interesting flights in the sky is a particularly nerdy hobby of mine. And especially in times like these when the sight of any plane in the sky is a cause of curiosity, weird flight paths stand out.

So when a flight path like this pops up on someone’s radar, I like to dig in to learn more about what’s going on. And h/t to @mouthofmorrison for replying to that tweet which caused it to show up in my feed.

Ok So What’s Going On Here

Well, first off, that odd looking flight looks to be an aerial survey flight path, as others noted in replies to that tweet. Telltale signs of these types of flights typically involve long straight lines and 180 turns, repeated back-and-forth over a large geographic area. Other types of flights have different telltale signs, which for the most part become apparent once you start recognizing the patterns.

These survey flights typically involve capturing aerial imagery used in a wide variety of applications, like the USDA’s NAIP program. Or they often involve measurements of elevation data using photogrammetry techniques or through the use of LIDAR sensors mounted on the underbelly of the plane.

Halff, 'How LiDAR Contributes to the World Around Us'

So it looks like this was an aerial survey flight, but who’s plane is it? It was apparently listed as private and only showed up as “Cessna 310R” on the image that was tweeted (which looks to be from FlightRadar24). It’s not uncommon in the world of ADS-B tracking for some aircraft operators to make privacy requests to mask the details of their aircraft, and typically the commercial tracking providers will honor those requests by plane owners. Unfortunately, this hides a lot of details when you’re trying to figure out a plane’s story and it becomes very difficult to search for a plane’s historic flight data using these commercial trackers.

But lucky for us, crowd-source efforts like The OpenSky Network for the most part are not beholden to such privacy requests. What this means is that we should have a much higher chance of finding and identifying a privately-listed aircraft when using these crowd-sourced ADS-B trackers. For more info on this, check out this thoroughly helpful guide to planespotting.

But all we know about the flight from that original image is that the aircraft was a Cessna 310R. Using The OpenSky Network, we could search their database for this aircraft model and go through all 611 listed planes to find one that has a recent flight path matching the one in the image. 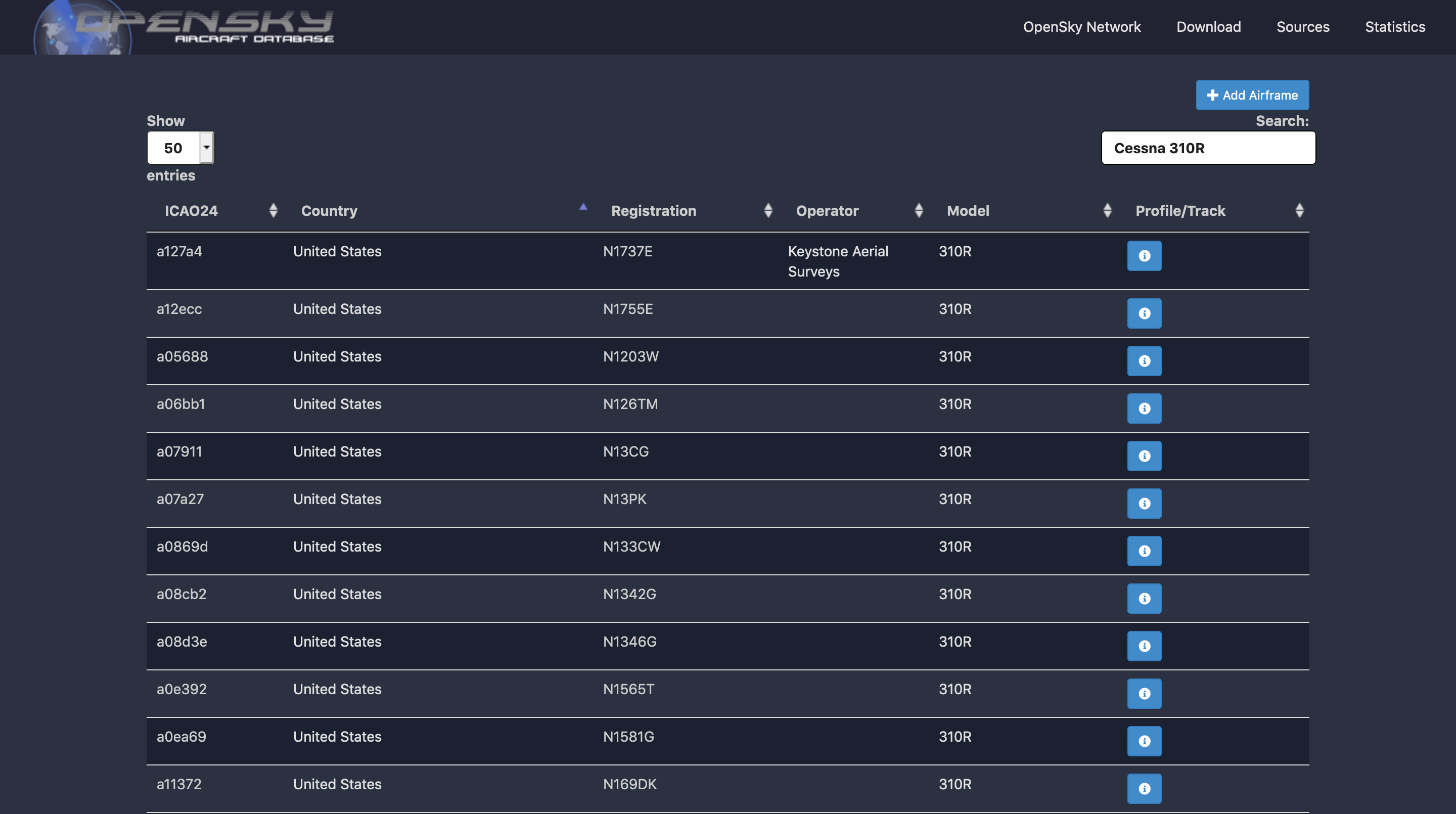 That would take…a bit of time though. Luckily, there’s one more piece of information we can glean from that flight path image that will prove very helpful.

From Whence You Came 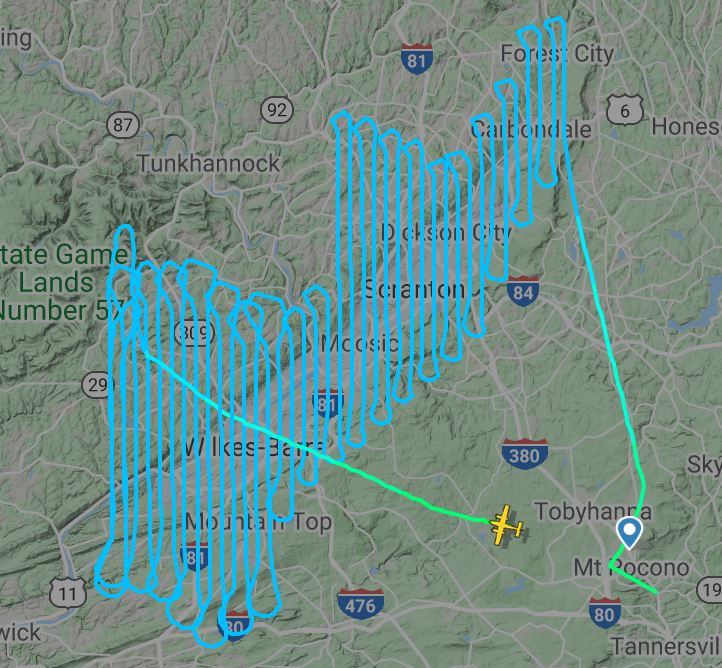 It appears that the aircraft takes off and lands from the same area, an airport near the town of Mt Pocono, PA. A quick search shows that the most likely candidate is the Pocono Mountains Municipal Airport, ICAO airport code “KMPO”.

We can then search for this airport code in The OpenSky Network and look at arrivals/departures at that airport on a specific date (April 6th 2020) to see if we can find our plane.

Based on the apparent length of that flight path, we’re looking for a somewhat longer flight time. There’s a 4 hour 42 minute long flight that looks to be a good candidate. That flight departed KMPO at 15:37 UTC (or about 10:37am local time) and then returned almost 5 hours later at 20:20 UTC (or 3:30pm local time).

The aircraft for that flight was N2636P. A quick FAA N-Number Inquiry, or really any simple web search, confirms that this N-number is in fact registered to a Cessna 310R aircraft. Now this flight looks like a really good candidate. 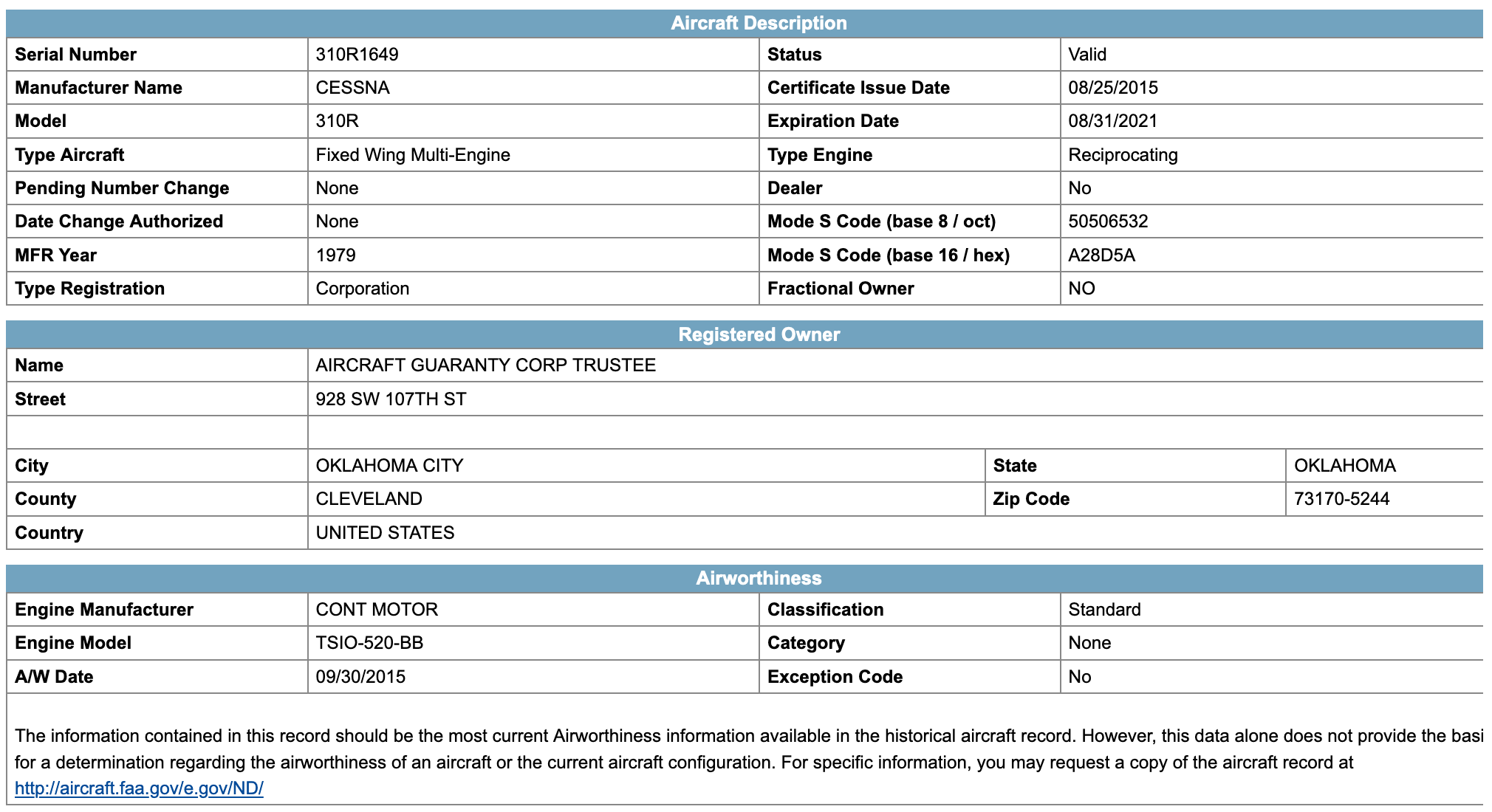 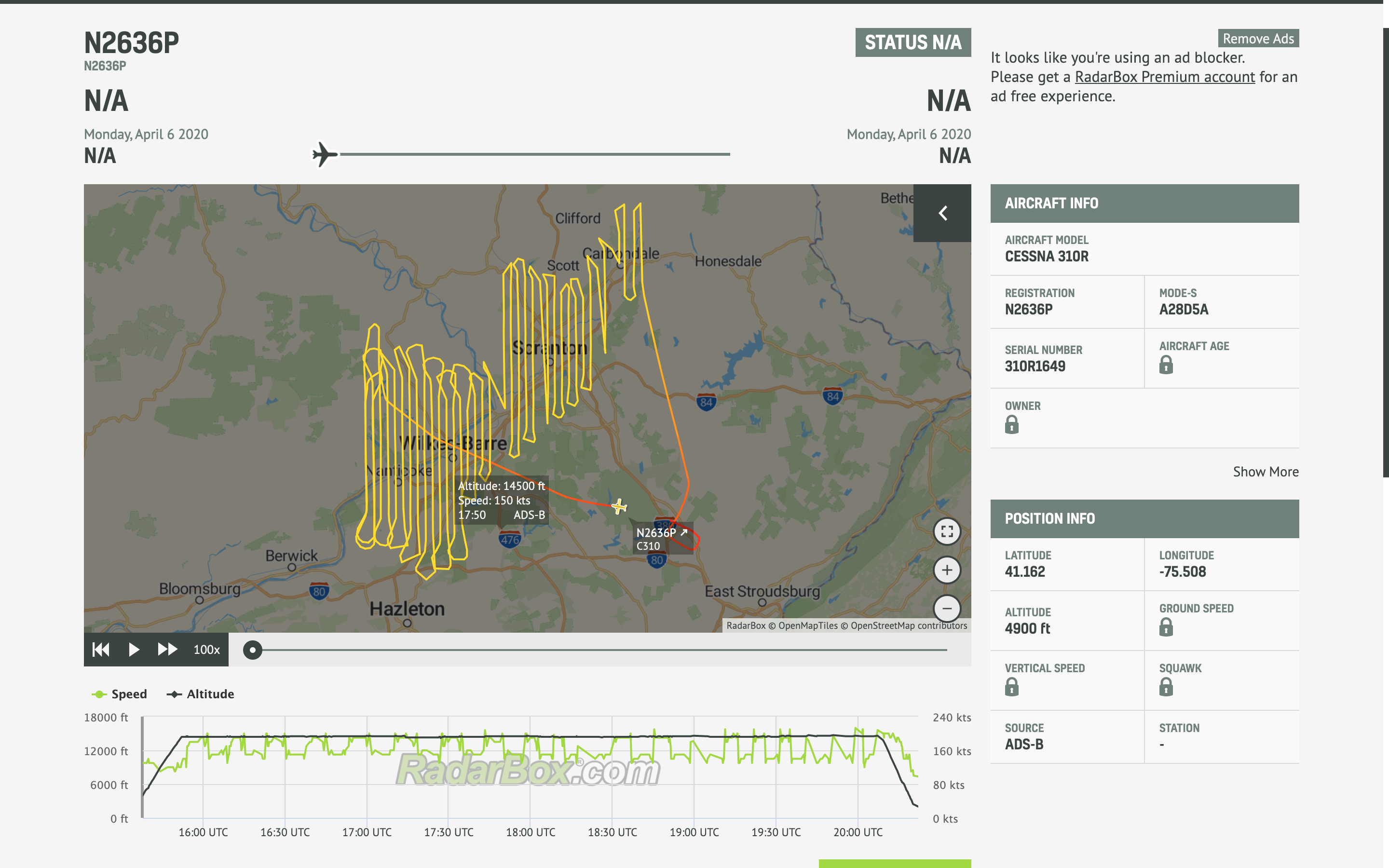 Now that we have the N-number (aka tail number), it makes it a lot easier to find more information on this specific plane. Aviation photography websites in particularly are a great resource to not only find helpful images of an aircraft, but also to help track when and where plane spotters last saw the plane, a bit of a reality check compared to the ADS-B tracking data.

A fairly recent June 2019 image of N2636P in particular confirms some of our other assumptions. 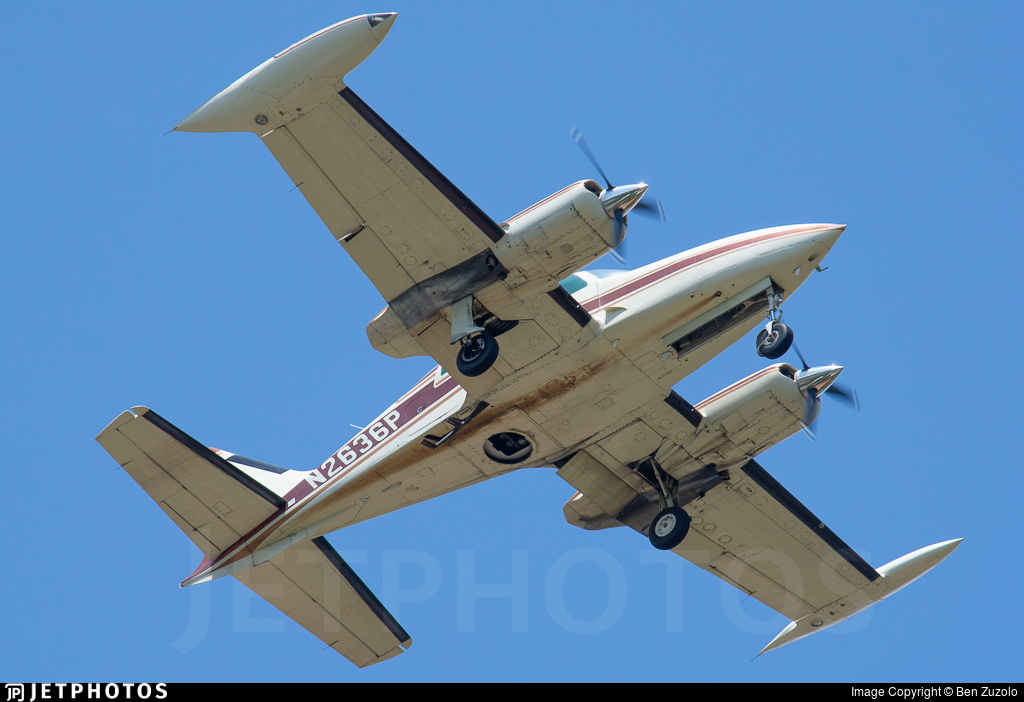 Namely, this image provides a great closeup of the aircraft’s underbelly, clearly showing what appears to be some type of lens opening in the center of the fuselage. That’s a good confirmation of our assumption that N2636P’s flight was an aerial survey of some kind.

We now know that N2636P was the Cessna 310R flying over Scranton and Wilkes-Barre area on April 6th, most likely doing an aerial survey using either a camera or LIDAR sensor. So now the question is, who owns aircraft N2636P?

Luckily, we’ve already come across this info from our FAA N-Number lookup. Unfortunately, that only shows the owner listed as “ Aircraft Guaranty Corp Trustee” of Oklahoma City. It’s not uncommon for operators to have their aircraft owned via owner trustees like this, but it makes it a bit harder for us to find out who’s actually operating the plane.

But now that we have the N-number of the aircraft, it makes it a lot easier to do some more detailed web searches. We can search for combinations of “N2636P”, “aerial imagery”, “LIDAR”, etc and sure enough there are hits on some older references from NOAA and various state GIS programs from the early to mid 2000’s. These results tell us that the N2636P at one time performed LIDAR topography data collection using a Leica ALS-50 LIDAR sensor, operated by EarthData International Inc.

Fugro Earthdata Inc (as it’s now known) is an “aerial and terrestrial surveying and mapping company”, a subsidiary of the Dutch multinational geospatial consulting company Fugro.

I’ll go out on a limb and guess that Fugro EarthData still owns and operates N2636P as an aerial LIDAR platform to this day. That could be wrong but the signs feel like they point that way.

So now we know that the flight was probably some kind of LIDAR aerial survey, likely operated by Fugro EarthData. But why was it collecting LIDAR data over Wilkes-Barre and Scranton specifically?

Well, it’s hard to know for sure. But like with the rest of this exploration, it’s fun and informative to try and make some educated guesses.

Chartering aerial surveys is not a cheap endeavor and is often paid for through state or federal programs of some kind. One place I often check for this type of thing is the usaspending.gov website, a great resource to find information on federal contracts and awards. A search for Fugro Earthdata as an award recipient doesn’t show any contracts in Pennsylvania, but their most recent award of $74k was for “Hyperspectral/LIDAR Imagery OF Black Rock Playa” from the Bureau of Land Management Nevada. That being said, Fugro EarthData does have other aerial imagery work currently ongoing in Pennsylvania though, according to one of their case studies on “3d oblique modeling” work in Cambria County.

This flight could have been part of that ongoing work, but it wasn’t flown over Cambria County, instead crossing between Luzerne and Lackawanna counties. But we can still make some other guesses about what this flight might have been doing over the Wilkes-Barre and Scranton area though.

One possible answer is that this N2636P flight was performing terrain elevation data collection for the US Geological Survey. The USGS is periodically updating its national 3D Elevation Program (3DEP), and the commonwealth of Pennsylvania is on the tail end of finishing up a recent statewide LIDAR collection campaign. 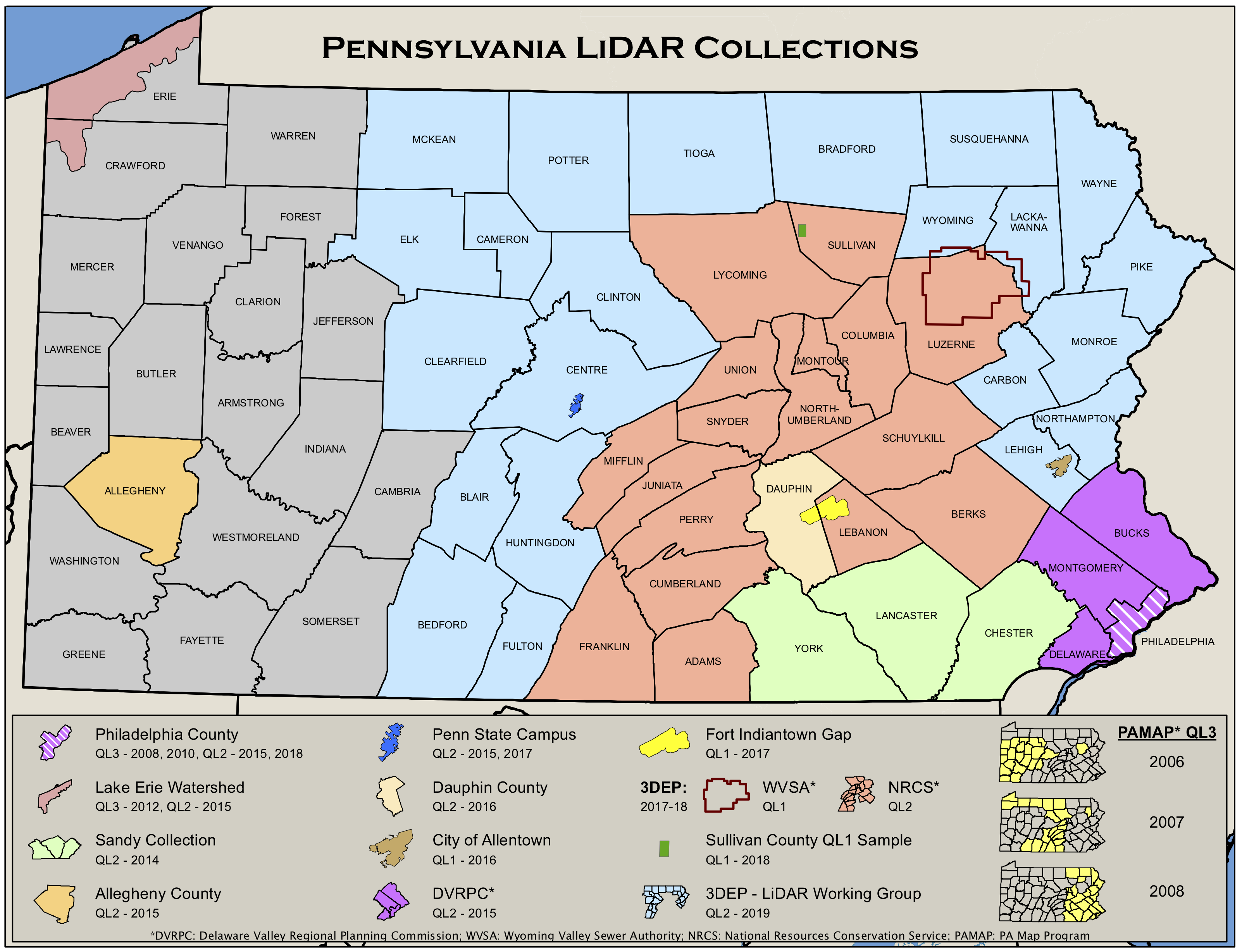 So in theory, this recent N2636P flight could have been part of that ongoing USGS effort. But it seems like most of that work was finished last year, so this might not be the right explanation.

Another guess worth looking into here is that the flight could have been chartered by an electrical utility in Pennsylvania. Aerial LiDAR scanning of power transmission line corridors is a useful and cost effective tool for utilities, helping to identify vegetation overgrowth that could affect electrical network reliability while also providing data for new transmission route planning. 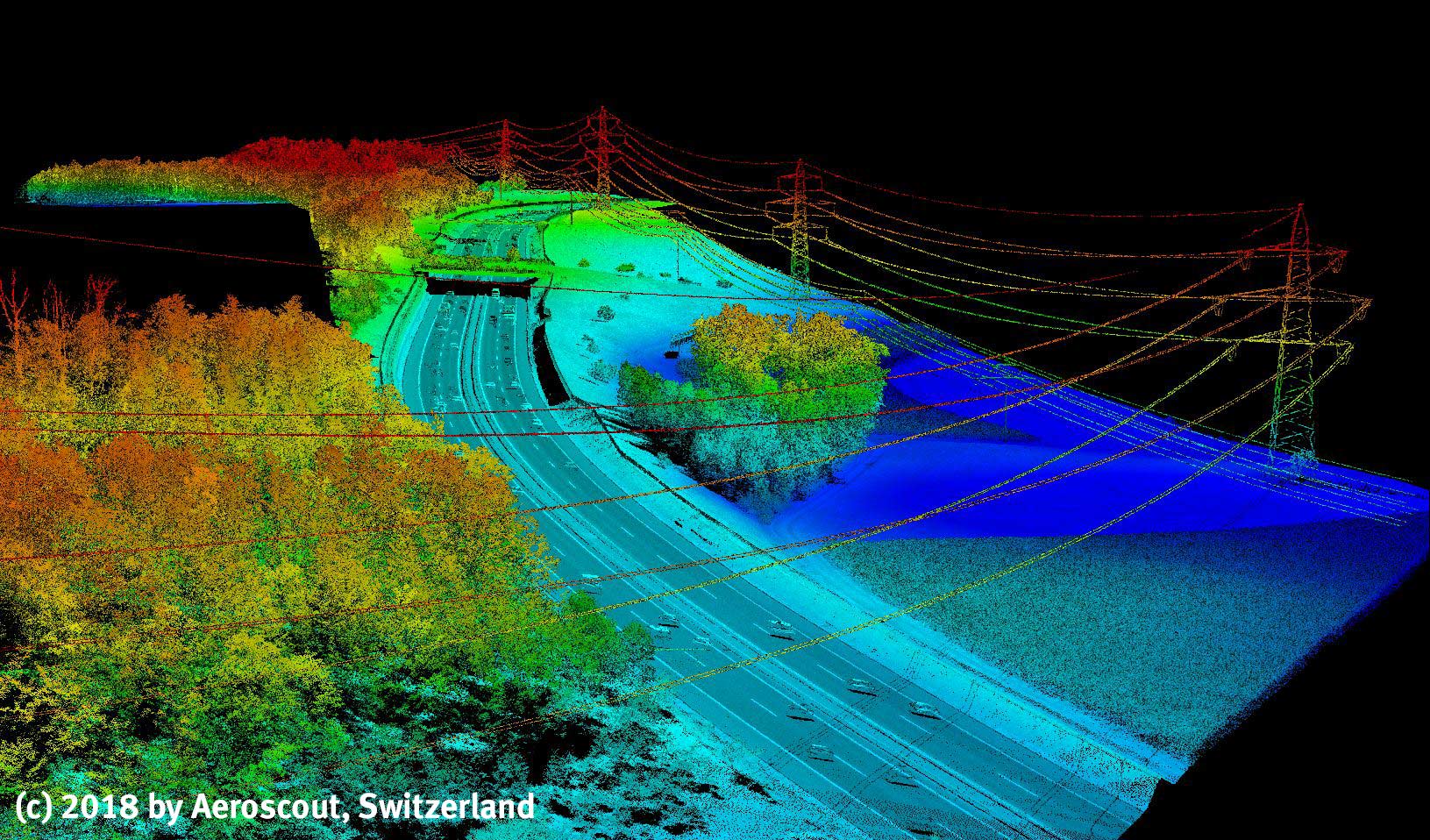 I wanted to test this hypothesis so I turned to Open Infrastructure Map for a quick visual reference. This map pulls crowd-sourced utility data from the global OpenStreetMap and it’s a handy tool for getting a high level view of utility infrastructure. I then pulled this same utility data from OpenStreetMap directly and, when combined with an export of the N2636P flight path from the OpenSky API, I was able to pull together this quick and dirty map below. 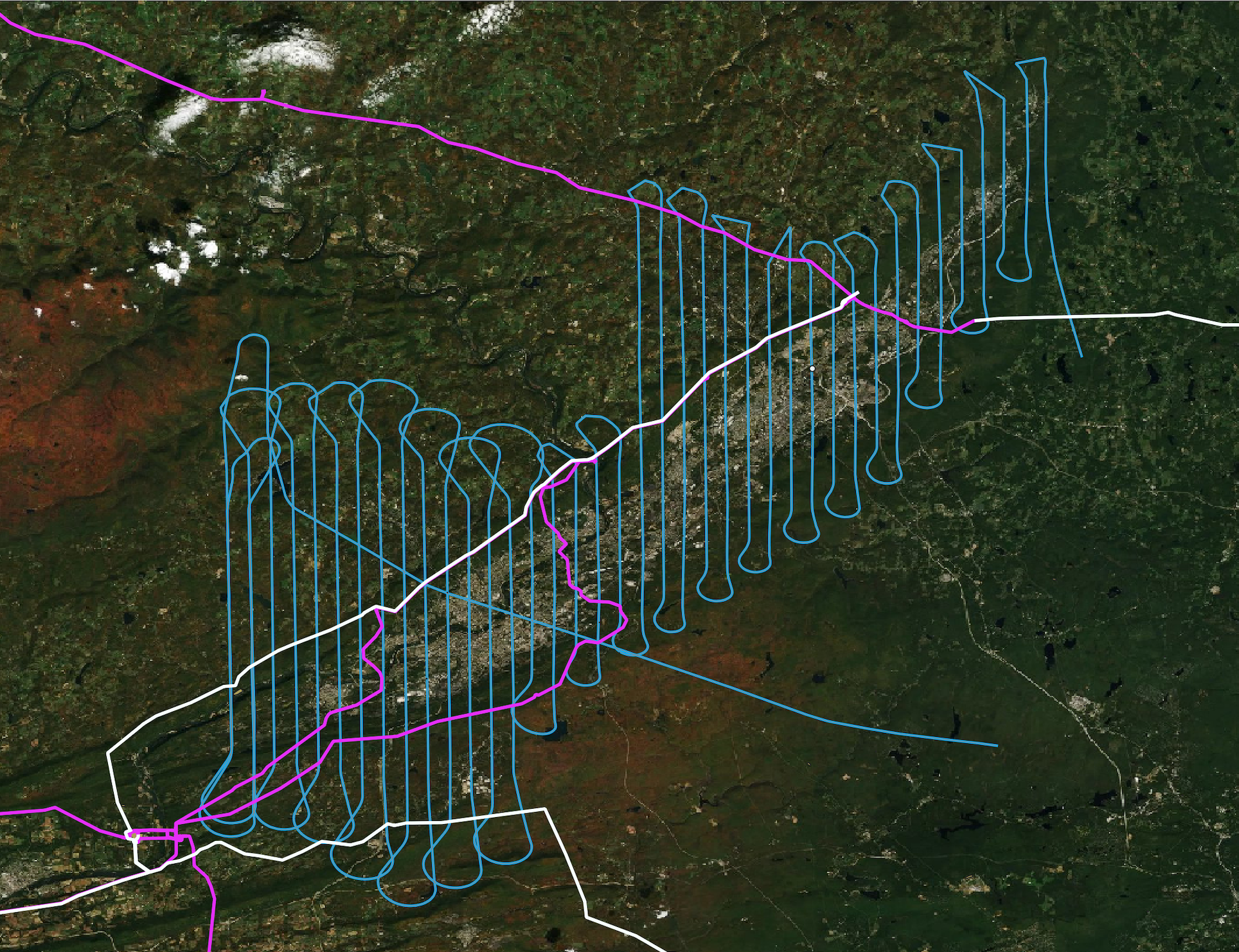 base image via Mapbox Satellite

This map shows N2636P’s flight path as well as a large 500 kV transmission line (in white) and some smaller 230 kV lines (in pink), both running right down the Wyoming Valley stretch between Wilkes-Barre and Scranton. This transmission corridor is bounded by the Susquehanna and Luckawanna Substations, all of which fall under the operation of the Pennsylvania Power and Light (PPL) utility.

The flight path generally covers the entire populated area of the Wyoming Valley, which would be expected if it was a topographic LIDAR survey for the county or the USGS. But based on this map data, I’m starting to like the idea that this N2636P flight might have been a LIDAR survey of this transmission line corridor. Mostly because what stands out to me is that some of the ends of the flight paths (those looping turnaround points) seem to line up really well with some of the transmission lines. Particularly the southwest portion of the 230 kV line (in white) and the upper portion of the 500 kV line (in pink) that’s doubling back towards the northwest.

Now I’m probably just reading too much into a coincidence of these overlapping path. But who knows, I think it’s a perfectly reasonable assumption in this case so I’ll stick with it.

Well, that’s all I’ve got. I’m not 100% convinced I was able to determine the exact nature of that N2636P flight on April 6th, other than it was likely an aerial LIDAR survey done by Fugro EarthData.

But the point of all of this was really just to see exactly how far we could go digging into a good explanation for what this flight might have been doing. We got pretty close I think and learned a bit along the way. It’s all about the investigative journey, the thrill of the hunt for some new and hopefully interesting information.