It’s been observed that a handful of US Army RO-6A and US Navy P-8A aircraft have been making similar flight patterns near the Hagerstown, Maryland area in the past year or so. The circular ground tracks of the flights are so similar that I’ve been wondering if they might somehow be related. 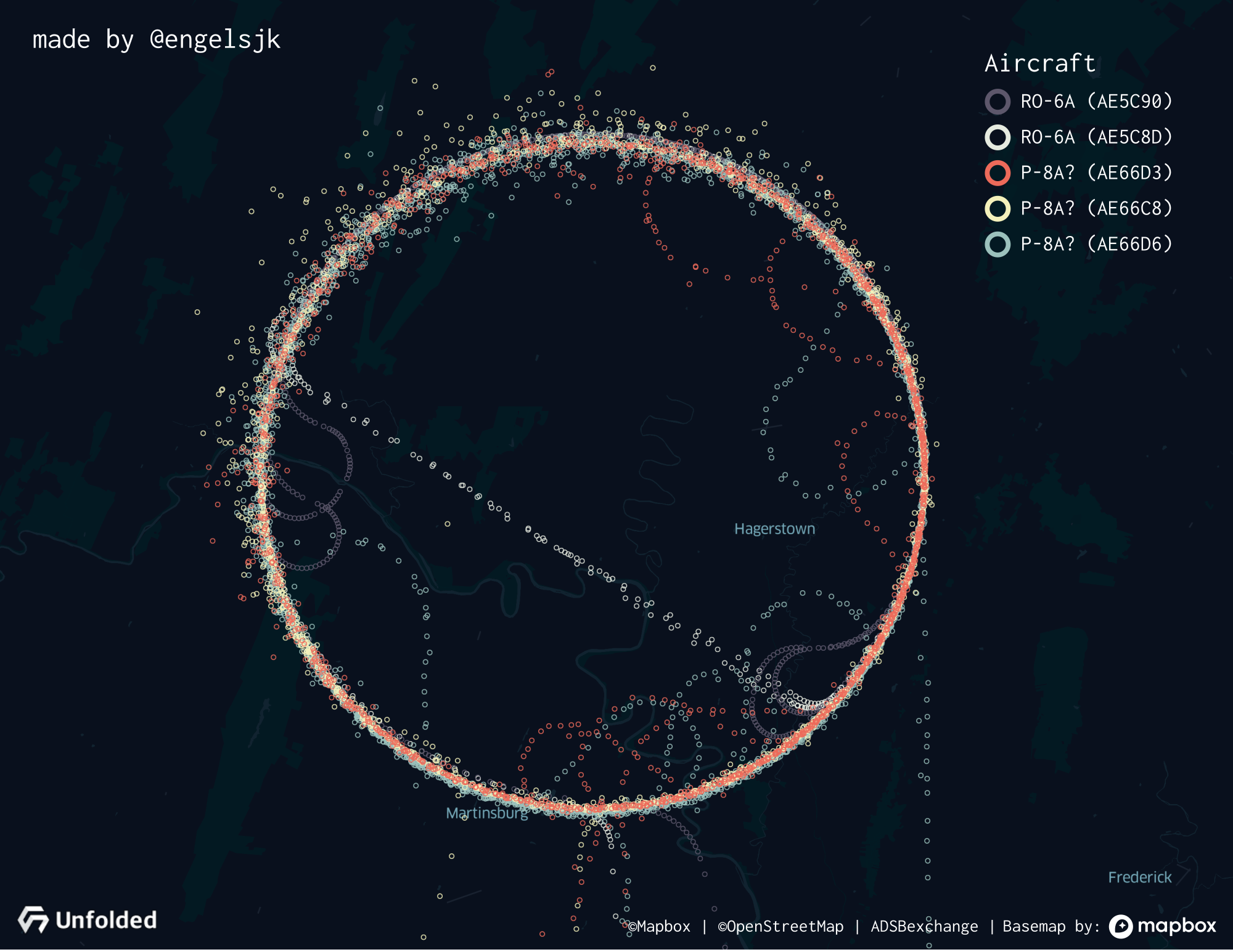 The similarity of these flight patterns has has been pointed out before, in particular by @ameliairheart on Twitter. 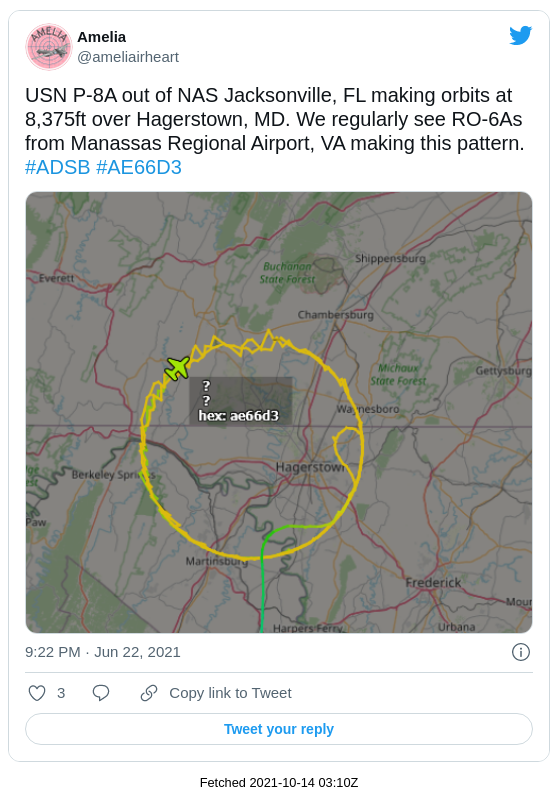 Observations of this type of flight activity pops up on Twitter every now and then, which is what originally motivated me into looking at all RO-6A flight activity in the Southwestern and Northeastern US. I’ve been compiling tracking data on these RO-6A flights and have some more thoughts there, but that’s a topic for another time. 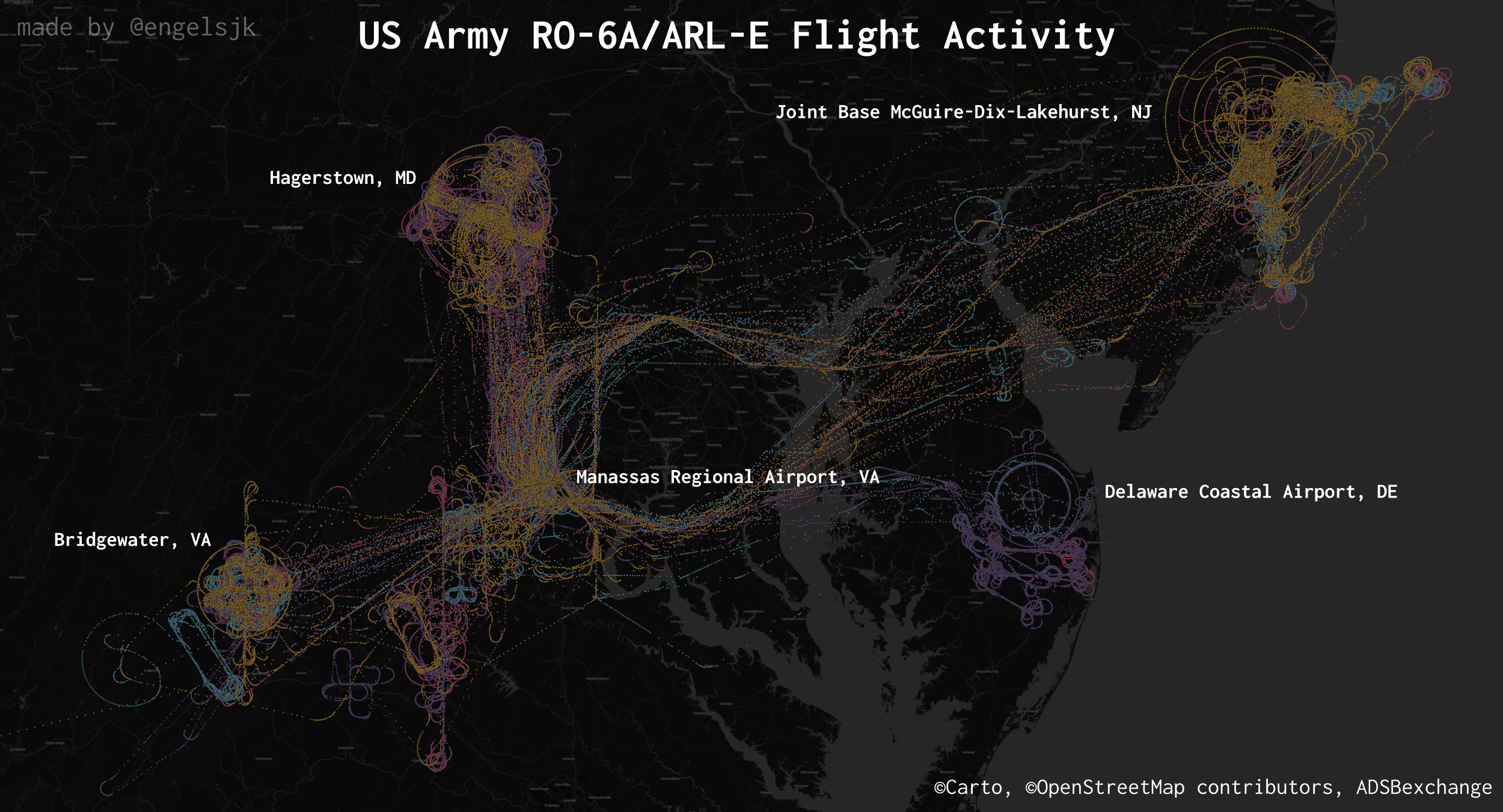 But for now, I want to specifically focus on a small subset of these flights, namely those identical circular flight orbits near Hagerstown (part of that upper left grouping in the image above).

For just the RO-6A aircraft, I’ve found at least six examples of those types of flights from this year alone. By my count, two different RO-6A aircraft and three (alleged) P-8A’s have flown these flights, all with ground tracks that line up almost identically.

Most notably, the orbits all have a roughly 150-km radius with a center point that lies somewhere in a nondescript farm field about 4.5 km from the Maryland/Pennsylvania border. Additionally, the RO-6A flights flew at an altitude of roughly 5,000 to 6,000 ft, while the P-8A flights flew at what appeared to be a few fixed altitudes between 5,000 and 34,000 ft.

It’s generally understood that these types of flight patterns are often related to some type of systems testing being done. As both the RO-6A and P-8A platforms perform Intelligence, Surveillance and Reconnaissance (ISR) roles for their respective military branches, it’s fair to assume that the testing being done with these flights is likely related to the ISR systems onboard each aircraft.

But the question is then, with these flights being so similar in ground tracks, might they somehow be related? One normally wouldn’t expect all too much overlap in the fixed-wing flight operations between the US Army and the US Navy, but I have a hunch that we might find something here.

Let’s assume for a second that there’s something of interest on the ground that these flights are in fact orbiting around. Knowing that these are ISR platforms, we’re looking for either a visible target or something on a different part of the electromagnetic spectrum. The nondescript farm field at the center of the flight orbits doesn’t offer much of interest as a visible target, so let’s assume that we’re looking for something more on the radio side of things.

Luckily @ameliairheart has previously pointed out that Sierra Nevada Corporation’s Integrated Mission Systems division works out of the nearby airport at Hagerstown. And as it turns out, Sierra Nevada Corporation has had an FCC license for a mobile ground station in the Hagerstown area since April 2020, centered a little over 2 km south of their offices with an operations radius of 150 km (!). The most recent version of the license notes the following:

Ok, now we’re talking. An aircraft with a “receive only system” flying on a “dedicated flight path”, near a mobile, transmitting ground station that is oprating within the same radius distance as the radius of our mysterious flight orbits.

Not only that, but the stated purpose of the operation is also worth noting:

If we now assume that these flights (or at the US Army’s RO-6A ones specifically) are testing for a “special mission system” for geolocation efforts, then let’s now take a closer look at the systems known to be on the RO-6A platform.

The RO-6A is the US Army’s aircraft designation for an ISR platform known as the Airborne Reconnaissance Low - Enhanced (ARL-E). Here we have a nice description from the US Army’s Acquisitions Support Center:

The Airborne Reconnaissance Low-Enhanced (ARL-E), designated RO-6A, is the Army’s newest manned multisensor, day and night, all-weather AISR system. ARL-E consists of a modified DHC-8-Q315 fixed-wing aircraft equipped with a reconfigurable payload with enhanced COMINT and IMINT sensors including long-range Ground and Dismounted Moving Target Indicator/Synthetic Aperture Radar high-definition EO/IR FMV, and Hyperspectral Imagery. The sensors are controlled and operated using onboard Distributed Common Ground Station-Army (DCGS-A) multifunction workstations. Intelligence collected on the ARL-E can be analyzed and disseminated in real time; transmitted via Beyond Line of Sight satellite communication; or stored onboard for post-mission analysis.

They also note that one of the RO-6A specifications include a “Tactical Signals and Communication Intelligence/Direction Finding Subsystems with Theater Net-Centric Geolocation”, which could be a good candidate for a “special missions system”. But we have even more detail than that, courtesy of previous reporting by Joseph Trevithick at The War Zone, on the specific make and model for each of the ARL-E’s COMINT systems (highlighted below).

This helps us to start narrowing some things down a bit. Additionally, a contract opportunity posted last year by the US Army’s Project Manager, Sensors-Aerial Intelligence (PM SAI) office tells us that each of these COMINT sensor systems (PRISM, Banshee, Adder, DRT) are all capable of signal emitter geolocation.

As a quick aside, it’s also worth nothing that most of these same COMINT systems can also be found on a few of the US Army’s other ISR platforms, including the Enhanced Medium Altitude Reconnaissance and Surveillance System (EMARSS) and the Guardrail Common Sensor (GRCS).

So, now we have some RO-6A’s, flying in circular orbits near a mobile ground station that’s being used to test a geolocation special missions system, and packed with all manner of COMINT sensor systems, all of which are capable of signal geolocation. This is all starting to feel like a more and more plausible explanation for what’s going on over Hagerstown, but let’s take a closer look at one of the manufacturers of these COMINT systems.

You can see in the table above that all of the COMINT systems on the RO-6A/ARL-E are built by either Argon ST or Digital Receiver Technology Inc (DRT), both of whom are subsidiaries of Boeing’s Electronic & Mission Systems (E&MS) division. Argon ST specifically provides a range of COMINT systems onboard both the ARL-E and other military platforms. 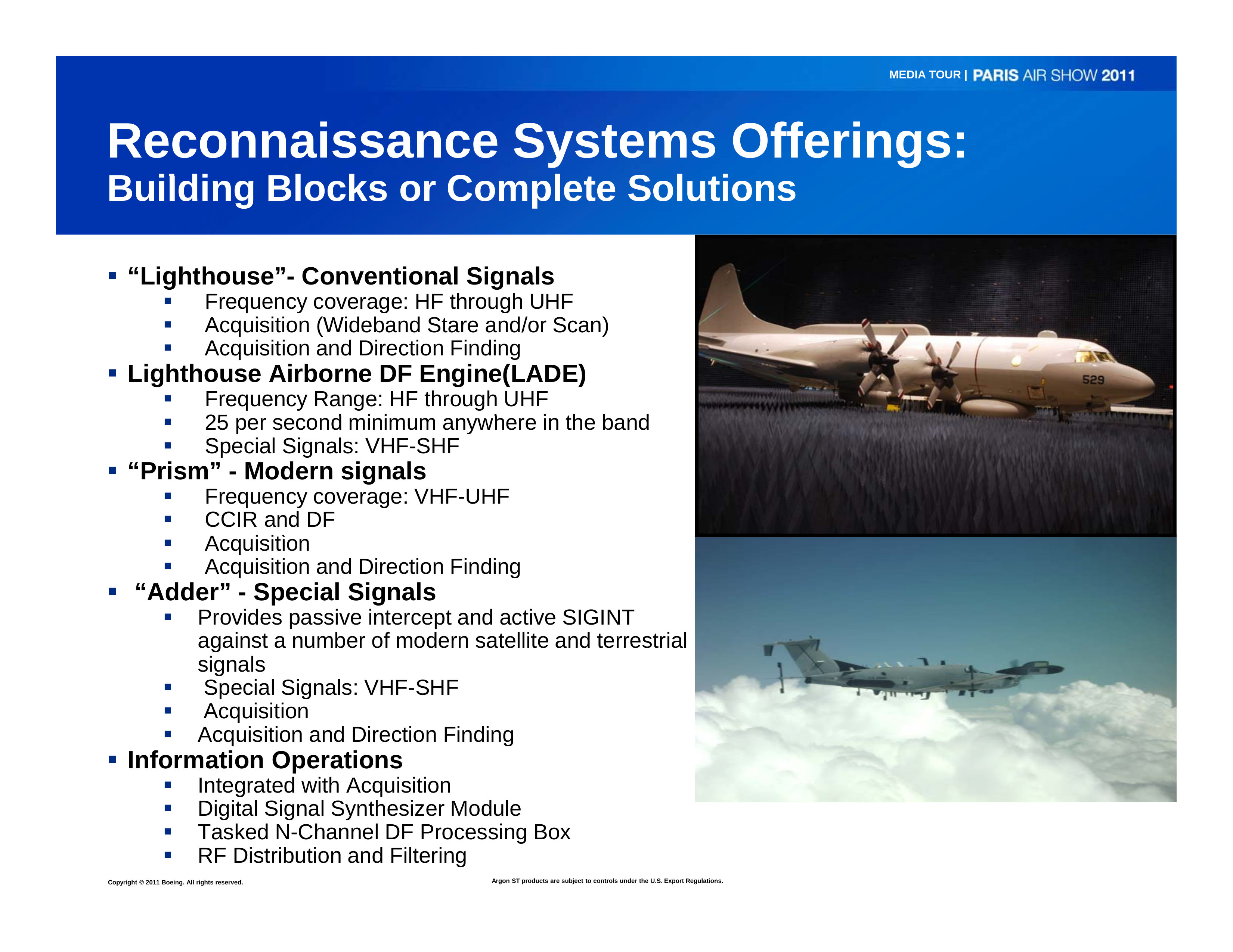 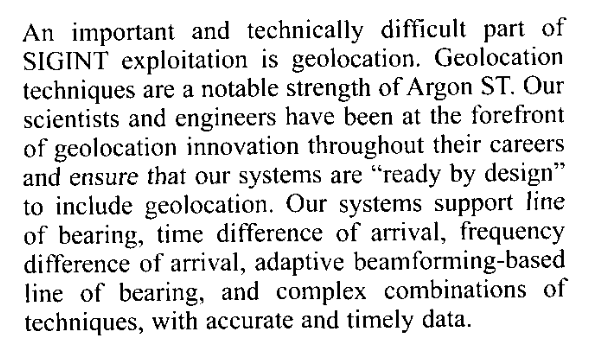 As one can imagine, more details about Argon ST’s COMINT systems capabilities and testing operations are sparse at best. But if we assume that these RO-6A flights are specifically intended for calibration and testing for the COMINT geolocation systems built by Argon ST, then what are those P-8A Poseidons doing flying almost the exact same orbits? And is there any connection between the RO-6A and P-8A platforms?

Well, the short answer is a strong maybe, and I think that Argon ST might be the common connection.

A few years ago, Boeing was developing a Multi-Mission Pod (MMP) for the P-8A platform that would “combine communications intelligence, signals intelligence and other capabilities.” At the time, Boeing had built only one pod and performed two flight tests, at least one of which was done at Naval Air Station Whidbey Island’s electronic warfare range.

Boeing didn’t provide many details about the MMP’s capabilities at the time, except to note the following:

That COMINT product line “Lighthouse” seems to refer specifically to Argon ST’s architecture for a wing-pod COMINT system. But it also seems that the Lighthouse system is built upon the same hardware/software technology found in their other COMINT systems, namely Banshee and Prism. 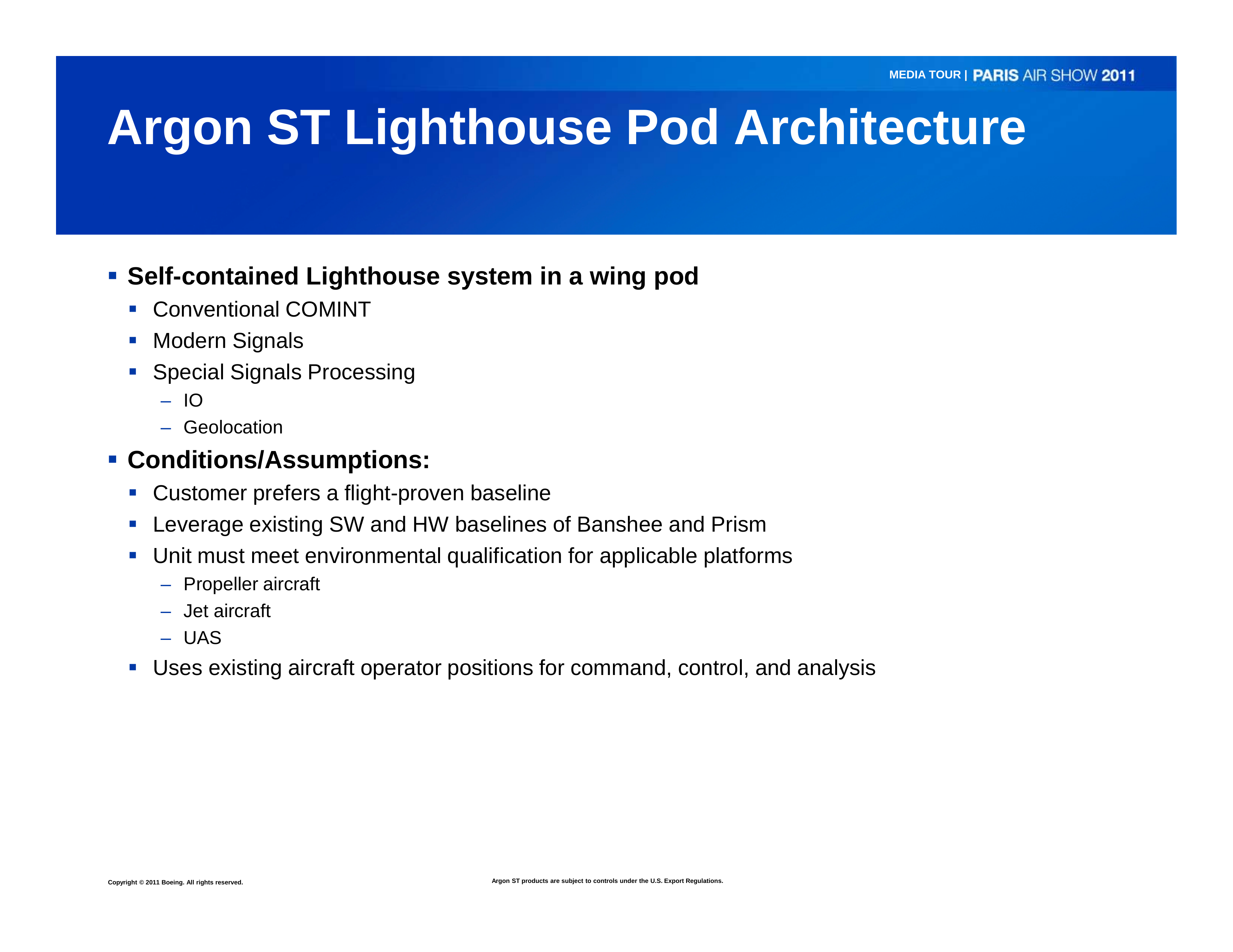 It’s quite likely that this refers to the same Banshee and Prism COMINT systems found on the RO-6A/ARL-E platform. That means that there may be a significant technology overlap between the COMINT capabilities of the RO-6A and the proposed systems pod for the P-8A.

So now we have two different airborne platforms in the RO-6A and P-8A, with potentially similar COMINT systems made by the same manufacturer, flying in the same orbits, all in the same area as a mobile ground system which is being used for the calibration of a receive-only, geolocation special missions system.

With this coincidental information, it would then be reasonable to assume that these circular flights by multiple RO-6A and P-8A aircraft are being flown for the testing and calibration of COMINT/geolocation systems built by Argon ST.

There are a lot of assumptions here in connecting the dots here between these particular RO-6A flights and a specific COMINT/geolocation system and its manufacturer. Extending these assumptions to the similar P-8A flights and a particular mission pod is itself yet another big jump however.

One important caveat here is that the US Navy seems to have scrapped their MMP plans for the P-8A early last year, and it’s unclear if that system is still undergoing any type of testing. If we are to assume that these P-8A flights are still related to the calibration of an Argon ST COMINT/geolocation system, then there might be one of two possible things happening here. Either (i) those particular P-8A flights were in fact carrying MMP’s for testing (which would mean that the US Navy is still considering the MMP in some capacity), or (ii) the COMINT/geolocation technology originally developed for the MMP is being tested for integration into the P-8A platform itself rather than in a mission pod.

Or none of the above could be true. It remains to be seen if any of this speculation about these RO-6A and P-8A flights is in any way accurate. But the coincidental pieces of information explored here do seem to offer a plausible explanation pointing at specific COMINT/geolocation systems being tested.